As he gears up to win the ANC presidency for a second term, President Cyril Ramaphosa’s issues only seem to get worse.
Another case has been opened against Ramaphosa, who is now defending himself and trying to evade the Phala Phala heist scandal and the related investigations.

At the Booysens police station in Johannesburg, businessman Reuben Sekwele has filed a criminal complaint against Ramaphosa for allegedly stealing his intellectual property. Ramaphosa allegedly stole the business plan that Sekwele, the CEO of independent electricity producer Rubbytad Group, submitted as an unsolicited offer, according to Sekwele.

He asserts that Ramaphosa subsequently included it in the country’s energy strategy. The businessman asserts that he personally handed Ramaphosa his business plan in around 2018, and they even got a picture of the exchange.

Sekwele asserts that Ramaphosa connected him to other government agencies since the president seemed pleased with the businessman’s business proposal. The businessman allegedly corresponded with those agencies through a series of emails.

Sekwele stated to the Sunday Independent yesterday that the president and other government departments had approved and utilized his material as their own, forcing him to start the case against Ramaphosa.

According to the Sunday Independent, Sekwele filed a lawsuit against the president and three other government agencies.

I’ve filed a lawsuit alleging that the president stole some of my intellectual property, and I’m ready for battle because I know they’ll send in snipers in the form of journalists and pundits to kill my reputation, he said.

Sekwele declined to provide any information on the case or the agencies involved, stating that he wanted to give police opportunity to conduct their investigation independently.

A case of intellectual property theft against the president has been initiated at the Booysens police station, according to police spokesperson Colonel Athlenda Mathe, who confirmed this yesterday.

“The SAPS confirms that a case of theft of intellectual property has been registered at the Booysens police station on September 28, 2022,” Mathe said.

Following the loss of hidden American dollars at the president’s Phala Phala farm in Bela-Bela, Limpopo in 2020, former state security director-general Arthur Fraser filed a criminal complaint in June against Ramaphosa and his head of security, General Wally Rhoode, for kidnapping and torture.

Fraser alleges that on February 9, 2020, five Namibian nationals entered into the president’s farm and seized the money that was hidden in furniture. Ramaphosa and Rhoode allegedly failed to report the incident to the police.

A police grabber was used to track down the robbers at a home in Milnerton, Cape Town, where the guys were allegedly tortured to confess to their crime, Fraser claimed in his affidavit. Rhoode was running a covert operation utilizing state resources, according to Fraser.

Fraser alleges that the thieves were paid R150 000 each to remain silent about the crime and their alleged torture after turning over part of their stolen goods. Ramaphosa acknowledged that there had been a robbery at his farm, and he had given Rhoode the responsibility of informing the police of the incident.

The Public Protector and the Hawks are both looking into the situation. Ramaphosa could possibly be removed from office by the parliament for allegedly misusing his executive authority.

A spokeswoman for Ramaphosa, Vincent Magwenya, stated on Saturday that the administration will wait for the results of the police investigation before taking any further action because a criminal case had been initiated.

“The President’s energy strategy was the result of interactions with a number of stakeholders in the public and commercial sectors. The main goal of the plan was to quicken procedures already in place that will increase the amount of megawatts added to the grid.

“Additionally, as previously said, the plan concentrated on getting Eskom to its ideal operational level in order to lessen load-shedding. No accountable government agency ever requested or invited “business plans” that might help the nation’s energy dilemma to be resolved. Numerous, frequently fairly complicated factors, as well as State organizations, are involved in the stabilization of the nation’s grid and increase in generation capacity. I don’t know how a “business strategy” from a single person would have dealt with all of those issues and their complexity for the government, the speaker remarked. 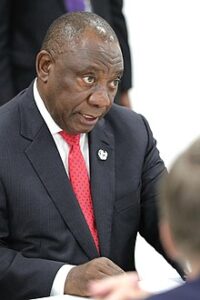 Magwenya clarified that he was uncertain how the state procurement laws would have interacted with the “business model.” He launched into a diatribe, criticizing the magazine and its parent corporation.

In general, he noted, “I’ve noticed that it’s become fashionable for some people to make any outrageous claims against the President and know that those claims will find attention and expression in a media platform like the Independent that maintains an open confrontational disposition towards the President and his administration.