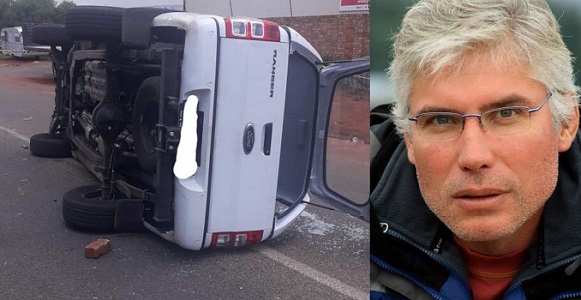 A video has surfaced online showing the scene where a security operative identified as Terance Tegg was murdered and killed by Clover strikers.

Reports from sources revealed that Terence 56 years of age who was working for Clover in Midrand was allegedly stoned by protesters as they were on their way to submit a memorandum of understanding at their place of employment.

Captain Bernard Matimulane, police spokesperson who confirmed the incident stated that three security officers whose names were not disclosed were also beaten and one has been hospitalized.

“The four security personnel came across striking employees from Fawu [Food and Allied Workers Union] and Giwusa [General Industries Workers Union of SA] at Olifantsfontein while on their way to hand over a memorandum in Boksburg,” Matimulane added.

Passengers on the buses allegedly attacked the dead and his crew members with stones, according to Matimulane. “After they disembarked, he [the victim] was beaten with an iron rod.

“Two suspects, a 33-year-old and a 47-year-old have already been apprehended after fleeing inside a neighboring building. “All specialists have been brought to the scene, and the police expect that further arrests will be made as a result of the evidence acquired,” Matimulane said.

The CMVO has subsequently posted a sympathy statement on its Facebook page, describing the occurrence as “a sad day.” Tegg was a former Recce, according to reports.

“Terence Tegg worked for 5 VK and was an operator for them […] We express our deepest condolences to his family. Thank you for your service and may you rest in peace.”

WARNING GRAPHIC VIDEO: The Scene Of The Incident

🔴WARNING: GRAPHIC🔴
This is the video of the scene where Terence Tegg was murdered by so-called ‘strikers’ at Clover in Gauteng last week. Originally I deleted it, but after a small edit I think the it should be shared again. Terence should not just be another murder statistic. pic.twitter.com/zEiaLvhCdS

1/3 Tonight I deleted the video I posted of the scene where Terrance Tegg was murdered this week. Usually I ignore comments and even though I don’t agree with people asking for removal, I decided to write a piece about why these videos SHOULD be shared for the world to see. pic.twitter.com/st8BLTucXP

2/4 To those not wanting for it to be shared, please don’t ask why mainstream media and the international arena are saying nothing, because you wouldn’t cause an outrage for Terrance and the other 22 000 people that will be murdered in South Africa before 2023. pic.twitter.com/BibXvhVR0P

3/5 To those wanting it to be censored, your wish has been granted. Please don’t ask why the world doesn’t act because your censorship has made Terrance a statistic and NOT a person. His story will not be told, he will just become a number because you caused no outrage. pic.twitter.com/QMtwHe1NLs

4/6 I think too many people in South Africa are comfortable with seeing the numbers like 22000 murders p/a and shy away when confronted with reality. pic.twitter.com/WWf7plCCqd

6/7 If this should ever happen to me, I want each and everyone of you to share ot with the world. (My family grants this wish). May you think of all the faces of the 22000 people that will be murdered in SA this year, make sure they don’t just become a statistic to you. pic.twitter.com/zjhJKmM0Kb