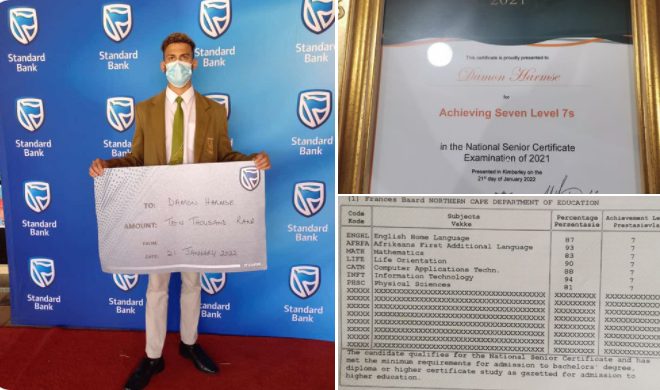 The matric results were released last week and many who sat for the exam are now counting their scores. One of the matriculants who shock the whole was Damon Harmse who made an impressive record of 7 Distinctions, described as the high mark so far in the matric exam.

Damon Harmse was awarded a whopping R10,000 for attaining such a high score of seven distinctions. The adolescent posed for photos that his cousin posted on Twitter. Standard Bank appears to have given the bright young man money as a prize.

Damon’s total average is 88 percent, with his lowest grade in Physical Sciences coming in at a whopping 81 percent.

The young academic received applauds from Twitter users who are shocked by his impressive. Netizens affirmed that he truly deserved the honor.

Congratulations lovely to see a Northerns student I these streets.