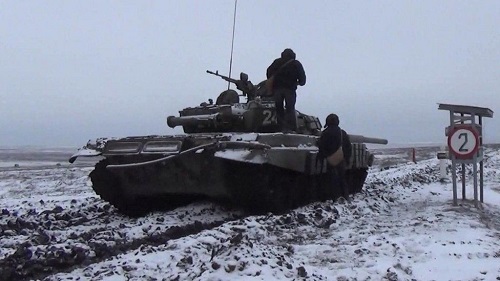 Biden claims that if Putin invades Ukraine, it will be the “most momentous event that has happened in the world, in terms of war and peace, since WWII.” He hopes Putin recognizes that he is not in a position to control the conflict.

In 2014, Russia annexed a portion of southern Ukraine and backed rebels who sparked a conflict in the east.

Russia is now threatening military action if the West does not satisfy its demands, and the US is concerned that it will be used as an excuse to invade.

This Is Why Ukrain Is Under Threat By The Russian Govt:

Ukraine has borders with both the EU and Russia, but being a former Soviet republic, it has strong social and cultural links with Russia, with Russian being widely spoken.

Russia has always opposed Ukraine’s integration into European institutions, and it now demands that it never join Nato, a demand that the Western alliance has refused.

Despite a weak truce, the conflict between insurgents and Ukraine’s military has persisted to this day.

The Russian soldiers operating across the Ukrainian border, though, are causing the most alarm. According to Western intelligence services, there are as many as 100,000 of them.

According to Nato’s secretary-general, the possibility of a confrontation is serious. However, it does not appear to be imminent.

After talks with his US counterpart in Geneva, Russia’s Deputy Foreign Minister Sergei Ryabkov insisted there were “no plans, no intentions to attack Ukraine”. Armed forces chief Valery Gerasimov earlier denounced reports of an impending invasion as a lie.

However, President Vladimir Putin has spoken of “appropriate retaliatory military-technical measures” if what he calls the West’s aggressive approach continues. And Mr Ryabkov has compared the current situation to the 1962 Cuban missile crisis, when the US and Soviet Union came close to nuclear conflict.

Mr. Putin has spoken several times to US President Joe Biden, and Russian officials have met US, Nato and European security counterparts. But Russian officials say the Western rejection of its key demands is leading to a “dead end” with no reason for further talks.

The US says Russia has offered no proof that it will not invade – or any explanation for the 100,000 troops it has deployed. So Western intelligence services as well as Ukraine’s have suggested a Russian incursion or invasion could happen sometime in early 2022.

Russia has bolstered its support in rebel-held areas of Ukraine, providing Russian passports for 500,000 people, so if it does not get what it wants then it could justify any action as protecting its own citizens.

The Pentagon has alleged that Russia has prepared a so-called false-flag operation, with operatives ready to carry out acts of sabotage against pro-Russian rebels, to provide a pretext for invasion. Russia has denied it.

In recasting its relationship with Nato, Russia has spoken of a “moment of truth,” and it is seeking a rapid, point-by-point answer to its demands.

Its principal demand is that Nato’s expansion to the east is halted. After meetings in Geneva, Mr. Ryabkov stated, “It is absolutely vital for us to guarantee Ukraine never, ever becomes a member of Nato.”

Moscow accuses NATO members of “pumping” arms into Ukraine and the United States of inflaming tensions. “Do they think we’ll just sit quietly by?” President Putin has lamented that Russia has “nowhere else to flee to.”

Russia, on the other hand, wants Nato to cease military operations in Eastern Europe, which would entail withdrawing combat forces from Poland and the Baltic republics of Estonia, Latvia, and Lithuania, as well as not putting missiles in nations like Poland and Romania.

In other words, it wants Nato’s frontiers to revert to what they were before 1997. Russia has also suggested a treaty with the United States prohibiting nuclear weapons from being deployed outside of their respective countries’ borders.