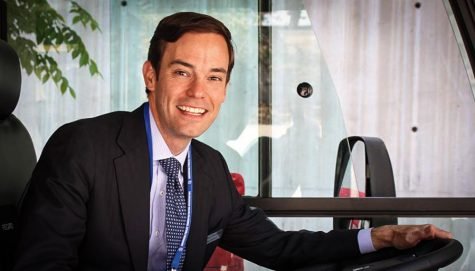 Proterra an American automotive and energy storage company based in Burlingame has lost one of their own Ryan Popple.

Ryan was the co-founder and former CEO of Proterra.

A statement released by the company on Thursday morning revealed that he passed away yesterday.

“We are deeply saddened by the passing of our colleague and dear friend, Ryan Popple”

Ryan was an embodied entrepreneurial spirited young man who devoted his life to creating a better future.

READ ALSO: Who Was Nick Sharp From Suburban Tragedy

According to the Proterra group, his leadership at the company was first and foremost about increasing access to affordable, sustainable solutions and shaping a zero-emission transportation future for the health of our planet and communities.

Ryan work as a partner at G2 Venture Partners and Kleiner Perkins was dedicated to leading the sustainable transformation of industries.

He was a former active-duty officer in the U.S. Army, Ryan put country before self in uniform, and in civilian life.

His legacy lives on not only at Proterra but with the communities around the world who can breathe easier and imagine a brighter future thanks to Ryan’s inspiring and transformational vision.

Above all, Ryan was a husband, father, and friend. We mourn with his family.

Proterra is an American automotive and energy storage company based in Burlingame, California.

The company designs and manufactures electric transit buses and electric charging systems. Proterra’s Catalyst series includes transit buses ranging from 35 feet (11 m) to 40 feet (12 m) in length and various battery configurations. Buses are charged through an overhead charging station that is placed at maintenance facilities as well as route terminals.

It was founded in 2004, it became a public company in June 2021 through a business transaction with a Nasdaq-listed special-purpose acquisition company.

In an exclusive Interview With Ryan Popple, CEO Of Proterra with Scott Cooney of CleanTechnica an online Tech blog back in 2016 Popple was described as one of the movers and shakers in cleantech. He was a formidable force for good. A former partner at the VC firm Kleiner Perkins whose investment management areas primarily focused on late-stage cleantech transportation firms, Popple also served as Senior Director of Finance at Tesla Motors, helping bring the company from pre-revenue to $100M+ and ultimately to an IPO.

He served on the EV Strategic Council and is the CEO of Proterra, a pioneering Silicon Valley-based electric bus manufacturer, which has made waves with innovations as supercharged as mobile charging for 24/7 bus operation and fibreglass bodies that are corrosion resistant and lightweight for maximum MPGe.

Scott said: “Recently, I had the great pleasure to sit down and talk shop with Popple about buses, the future of cities, the amazing divergence in American politics, and the recent Dieselgate fiasco that has made selling electric alternatives to diesel much easier.

Give us a snapshot of where Proterra is today, and what you’re seeing in the pipeline from customers buying buses?

We’re approaching 300 confirmed orders in the U.S. market. The growth in the last 18 months has been a tremendous validation of our strategy that EV is the most economically and environmentally efficient mode of mass transit.

There are only a few transit agencies that don’t seem to get it yet, but you always see that in a market. You have leaders and laggards. I’d say we’re deploying with the leaders, the early majority, and increasingly mass-market type buyers. You have a few laggards out there, but the market has shifted.

By 2020, every major fleet should be in implementation mode. By 2025, I think 50% of new purchases will be EV. Diesel, hybrid, and CNG will go completely extinct in transit, starting in 2020. By 2030, there may not be diesel on the road in California and Washington State. The cycle will start accelerating.

Diesel bus manufacturers’ growth rate will turn negative, they will lose access to bank and equity capital, and they will go bankrupt. As the supply shrinks, the cost of fossil fuel vehicles and spare parts will inflate, further disadvantaging the legacy tech. I would not want to be the last agency to purchase diesel or CNG. The residual value of that tech will be zero. You’ll have stranded assets, like CNG fast-fill stations with nothing to refuel. Diesel spare parts that get auctioned.

Woman in California buys a winning lottery number of $ 26 million, accidentally threw the ticket into the washing machine

CEO At Crunchy Logistic, Neil Dufva Has Passed Away