English model Chloe Madeley has responded back to her keenly seem fan who asked her if she wants children.

The 34-year-old television personality made her inquisitive fan understand why it is not good to be asking women if they are having kids.

According to her, she received the question: ‘Do you want children,’ to which she responded: ‘Lisa you ask me this every time I do a Q&A and every time I tell you it’s a really inappropriate question you don’t seem to take it in.’ 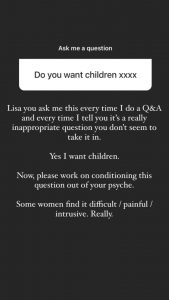 She continued by confirming: ‘Yes I want children,’ and wants that to be the last time she’s quizzed on the matter.

‘Now, please work on conditioning this question out of your psyche,’ she said.

The TV presenter concluded by saying ‘some women’ find the question ‘difficult/painful/intrusive.’

Chloe isn’t the only star recently to call out these types of questions, as Jennifer Aniston also hit out at those who pry into her life yet know absolutely nothing about her ‘personal’ or ‘medical’ history.

The Friends actor told The Hollywood Reporter: ‘I used to take it all very personally, the pregnancy rumours and the whole, “Oh, she chose career over kids’” assumption.

‘It’s like, “You have no clue what’s going with me personally, medically, why I can’t, can I have kids?” They don’t know anything.’