A young woman has narrated how she was hypnotised by a man who robbed her while pretending to be a Bank customer.

While explaining her ordeal, she said she visited a bank ATM at Lautech Teaching Hospital located in her area and while withdrawing money a man approached her and asked if the other ATM was working and after that, all she could remember was her trip to the bank atm.

She went further to say that after that she found herself at home without the money she withdrew. 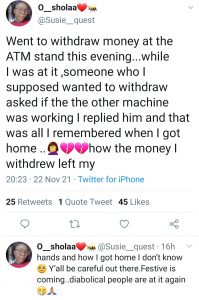