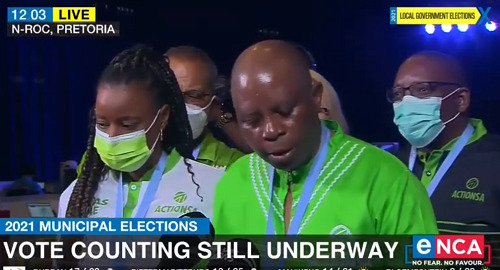 Action SA leader on Wednesday that his party will collaborate in any form with the ANC in the bid to achieve a common goal.

Herman Mashsaba made this known during a press briefing on Wednesday at the IEC results Operation Centre where he announced the outcomes of the party’s special Post-Election Senate Meeting.

The Action SA leader says he’s proven beyond reasonable doubt that ActionSA is the only party capable of unseating the ANC.

Mr  Mashaba does not intend to strong-arm any political parties towards a bid to become Johannesburg mayor once again, during coalition negotiations that now look certain to commence in the metro after Monday’s local government elections.

Mashaba instead intends to go into such talks in good faith, he said on Tuesday as results trickling in pointed to his party taking a chunk of votes away from the Democratic Alliance (DA) and the ANC.

By 4.40pm, projections from the Council for Scientific and Industrial Research (CSIR) suggested that ActionSA, contesting in its first-ever election, would take 11.8% of the votes in Johannesburg, with the ANC predicted to take 35% and the DA 29.8%.

Speaking to the Mail & Guardian at the national results centre, Mashaba said ActionSA wanted an arrangement that benefited the people of Johannesburg.

“One thing in my business career even when I was a trader selling products from the boot of my car, when you negotiate, negotiate in good faith. For me to be honest with you, negotiations are always successful when it’s a win win. I’m not going to impose my will when I negotiate. I don’t negotiate where I’m the only person who benefits because a sustainable business relationship is where both parties benefit,” he said.