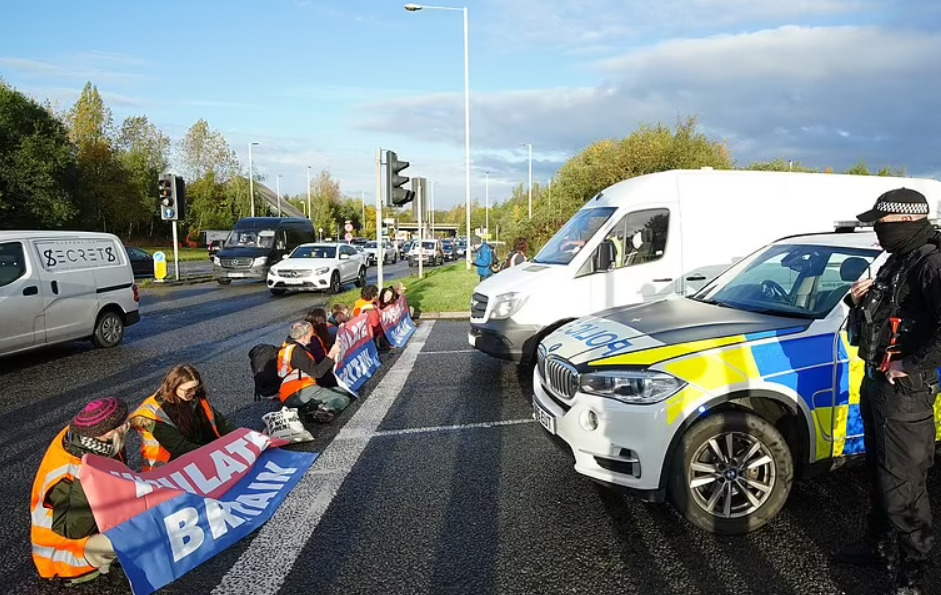 Climate protesters on Tuesday morning blocked strategic routes in the UK and narrowly avoided getting run over in the busy road.

At least a team of 12 demonstrators stopped traffic on the M56 near Manchester Airport, while another group brought chaos to the A4400 in Birmingham – marking the first time Insulate Britain has targeted either city. 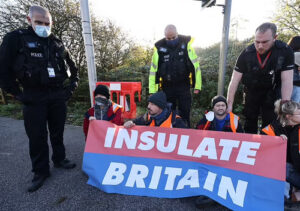 All roads and motorways in Manchester, Birmingham and Hertfordshire were blocked during the rush hour as their demonstrations entered the eighth week.

The environmental activists also hoped to blockade the M25 at junction 23 for the South Mimms service station in Hertfordshire, but police swooped on them before they could get onto the road and could cause mayhem.

Van drivers were seen angrily remonstrating with the activists in Manchester, while in South Mimms a motorist went through a red light and narrowly missed two police officers escorting an eco protester out of the road.

It comes as the eyes of the world are on Britain as representatives of 200 nations gather in Glasgow to thrash out a deal to try to limit global warming to 1.5C at the landmark Cop26 climate change conference.

Insulate Britain’s activists have brought chaos to motorways and A-roads across the capital since September 13 with 161 people taking part in the campaign and 770 arrests made so far – but no one has yet been charged.

The activists were effectively banned from all major roads in England on Monday last week after a major High Court ruling, and a hearing was told just three days of their protests had an ‘economic cost’ of almost £900,000.