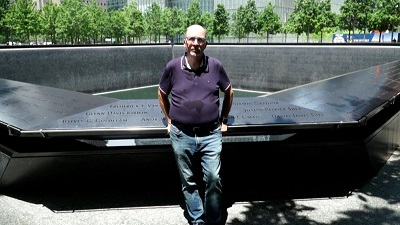 Joseph Dittmar recounts how he managed to escape from the 105th floor of the World Trade Center during the 9/11 attack in 2001.

According to him, Joseph Dittmar wavers between laughter and tears: telling how he escaped from the 105th floor of the World Trade Center is his way of surviving.

The story of his descent from those 105 floors , which he preserves 20 years later with a photographic memory, resembles a tragic epic. This father of four, who was attending an insurance brokers meeting that day in a windowless room in the south tower, owes his survival to decisions he made in seconds.

When the first plane hijacked by jihadists crashed into the north tower, the 54 participants only perceived the light flickering. On the 90th floor, after hearing several calls to evacuate, they saw the drama in the north tower through a window.

“It was the worst 30.40 seconds of my life. We saw furniture, papers, people rushing into the void, terrifying, terrible things. I was so scared, ”he says .

A native of Philadelphia, then a Chicago resident, he couldn’t help but think: “Every time I come to this city something happens!”

He returned to the stairs and ran into a colleague, a “giant” former football player, Ludwig Picarro, who wanted to go to the bathroom. It did not survive.

On the 78th floor, a colleague yelled at him to take the express elevator with her, to get down faster.

But this insurance broker knew that you have to avoid the elevator in case of fire. And he rushed down the ladder, “the best decision of my life.”

“At some point, between the 74th and 75th floors, the stairwell begins to swing violently, the handrails detach from the wall, the steps undulate under our feet like waves in an ocean, we feel a wall of heat, we smell fuel ” , remember.

Another plane had just crashed into their tower, just above them, between floors 77 and 82.

Despite his fear, he remembers an incredible “solidarity”, like that man who carried a disabled woman on his back.

But the tears return when he evokes the “true heroes” he crossed on the ladder in those 50 minutes of descent , starting with the firefighters and rescuers on the 31st floor, who climbed against the current to save the trapped people.

” Their look revealed that there was no hope (…), they knew they would not return, ” he said. How can we be so brave, so strong? He wonders.

On the 15th floor, he heard a security guard chant ” God Bless America” over the megaphone , while urging humorously to evacuate the building.

He sang “horrible” but “tried to soften people’s spirits (…) like the captain of the Titanic who made his musicians play while people boarded the emergency boats .”

On reaching the ground floor, Dittmar and a colleague made their way through the WTC’s underground mall and surfaced.

Suddenly they felt a crash behind them. It was the collapse of the south tower. And they heard “the cry” of tens of thousands of people.

That noise, those screams, Dittmar still hears “every day.”

Dittmar has told his story hundreds of times to school children across the country.

“It’s my therapy,” he says. “I knew pretty early that to survive I had to keep telling it.”

With the date “911” tattooed on his wrist, a twin towers pin on the collar of his jacket and a stone that he always caresses in his pocket, 9/11 accompanies him “like a shadow”.

Dittmar, who continues to work in insurance but has moved to Delaware, says he greatly admires New Yorkers.

“They are incredibly resilient, they are not afraid of anything (…) I learned to love them.”

He too, diabetic, had covid-19 but resisted. And with the help of his wife he began to eat healthier, to walk 5 km a day, and lost 23 kilos.

“The pandemic, a bit like September 11, transformed me … I told myself that I can improve.”