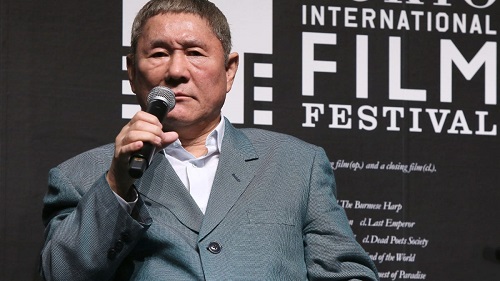 Police in Japan has arrested the prime suspect who was allegedly tied to attack popular Japanese filmmaker and actor Takeshi Kitano during his visit to the TBS television network after his weekly live talk show Saturday night.

The incident which happened on Saturday left many stunned after the 74-year-old director moved inside his car with his driver and was just leaving the compound of the TBS television network.

Relating the incident on Monday, The TBS and other media outlets said the attacker, a male in his 40s from the Chiba region east of Tokyo cracked the windshield and beat other parts of the vehicle, demanding that Takeshi get out of the car. A security guard called the police and the suspect was arrested at the scene.

Reports also gathered said that the man was carrying a knife with a 10-centimetre (4-inch) blade.

TBS said the suspect told police that he got angry after he was ignored in June when he kneeled down before Kitano’s car, seeking help to let him join the entertainment industry. Police are still interviewing the man to determine his motive.

The Japanese actor Kitano, has been a popular filmmaker known by his stage name as Beat Takeshi, first drew acclaim for his raw depictions of the violent world of Japanese organized crime. He garnered international fame for his roles in the gritty dystopian thriller “Battle Royale” as well as in the eponymous comedy game show “Takeshi’s Castle”.

He won the Golden Lion at the Venice Film Festival for Hana-Bi in 1997 and has also directed other popular films including Zatoichi, Sonatine, and Outrage.