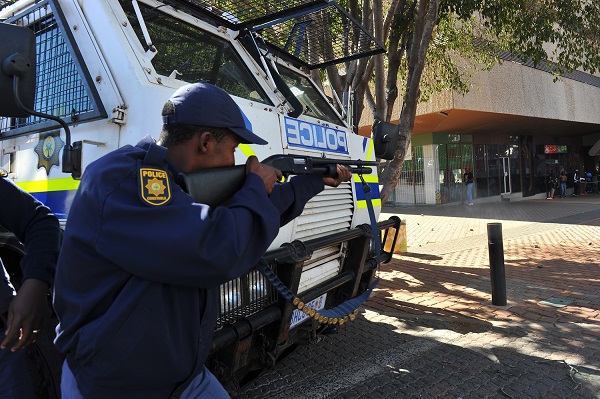 Currently, the unrest in the country has escalated to a new level of destruction of properties, this morning Pietermaritzburg has been turned upside down following the ongoing protest which resulted after the former president Jacob Zuma was incarcerated.

Heavy protest and looting have continued at Brookside Mall in Pietermaritzburg  South Africa.

The capital city of KwaZulu-Natal is on fire as violent protests continue, as we write this report many public stores have already closed due to attacks and looting of public properties.

#ShutdownSA Looting continues at Brookside Mall in Pietermaritzburg. The capital city of KwaZulu-Natal is on fire as violent protests continue. #eNCA pic.twitter.com/hwkli5RQPX

Ordinary people are jumping out of their cars to help police clear the N2 to proceed. Another officer has gone up to the bridge to keep guard and stop the rock-throwing. #SAShutdown #eNCA pic.twitter.com/ksjdyM1syV

Toyzone on Monday temporally closed down their stores due to the increasing level of the current unrest in KwaZulu-Natal.

The store made this known on Monday through their Twitter page saying that all their KZN stores will be closing today 12th July 2021 for the safety of their staff.

All our KZN stores will be CLOSED today (12 July 2021) for the safety of our staff due to the unrest.

We urge our customers to please stay safe during these trying times.”

All our KZN stores will be CLOSED today (12 July 2021) for the safety of our staff due to the unrest.

We urge our customers to please stay safe during these trying times.#Toyzone pic.twitter.com/eeur1IJN0q

WATCH: Looting at Tops in Berea right now. A private security official tells me they tried to stop the crowd but were outnumbered. @SAPoliceService required on scene. @News24 #SAShutdown (@kaveels) pic.twitter.com/Oa2c2LhM2C

Gunshots and explosions rang out when looting and mayhem continued in many parts KwaZulu-Natal on Monday morning, major routes were closed to traffic, Durban’s public transport system was not operating and even funerals had been put on hold.

Protesters continued to loot shopping centres on Monday morning. Some were seen walking off with appliances, including TVs and washing machines, and trolleys filled to the brim.

Reports from Pietermaritzburg indicated that Brookside Mall was on fire.

On Sunday night, as shops were looted in the Durban city centre, Tongaat, Verulam, Amanzimtoti, Springfield and Overport, the eThekwini Municipality announced that its bus service would not be in operation on Monday.

“This is as a result of the current civil unrest. In addition to the bus service, residents can expect other service delivery interruptions over the next few days. While the municipality remains committed to minimising the interruptions, the safety of employees and municipal assets remains paramount,” it said.

The South African National Taxi Council (Santaco) in KZN said taxis would not be operating.

“This in protection of the same taxis that may be damaged.”

— Rob Beezy (@TrafficSA) July 12, 2021
The entire N3 Toll Route, in both directions, from Harrismith in the Free State to Cedara in KwaZulu-Natal, was closed to traffic as “a result of the current spate of uncontrollable violent attacks on road users, trucks, security and emergency services and businesses”.

— Rob Beezy (@TrafficSA) July 12, 2021
Police and private security companies battled to disperse protesters from Friday when the protest action, themed #FreeJacobZuma and #KZNShutdown on social media, saw violence erupting across the province. It has since spread to Gauteng.

The protesters have created road blockages, are massively targeted at the commuters and their vehicles.

Reports across KwaZulu-Natal, South Africa, overnight July 9-10. said violence is likely linked to the ongoing incarceration of former President Jacob Zuma. Some incidents have been included below.

Roadblock at the Weenen Junction along the R103 route in Estcourt.

Roadblock along the N2 highway between the Gingindlovu and Amatikulu exits. Protest in the nearby Dokodweni area.

Transport vehicles attacked overnight along the N2 highway between Hluhluwe and Mtubatuba.

Protests in the Umgababa and Amanzimtoti areas south of Durban.

Protest at the Tollgate Bridge along the N3 in the Durban area.

Authorities are likely to deploy security and traffic management personnel to areas where protests are occurring. Ground travel disruptions are likely near all protest sites. Clashes between protesters and the police are possible if demonstrators ignore police orders to disperse or if protests escalate. Protesters may also engage in acts of public violence, including looting.