In the mid of today, unverified information that talented South African singer and Kwaito legend, Bonginkosi Dlamini passed away surfaced on social media. Many of his fans scaffold to know if the news was really true.

The news of Zola 7’s death is likely not to be true as no verified source, his management or family has confirmed he died.

As for now, Zola 7 is still alive and doing well. 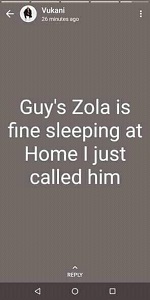 SA Singer Vukani also confirmed that Zola 7 is alive and that he spoke with him a while ago. “Guy’s Zola is fine sleeping at home, i just called him” – Vukani wrote on his Facebook status.

Zola has been an icon to South Africans for years and he inspired the youth to stand up to themselves and showcase their talents. His philanthropic work in uplifting communities and empowering the youth speaks for itself.

Besides doing so through his music, Zola has also given back through one of the many initiatives he has started, which was aimed at giving away bursaries to youth in need of financial assistance for their education.

The singer was first diagnosed with epilepsy three years ago and has silently been battling the chronic illness that has since turned his life upside down.

Last week there were reports that his management team had begun a crowdfunding campaign to help fund his mounting medical bills.