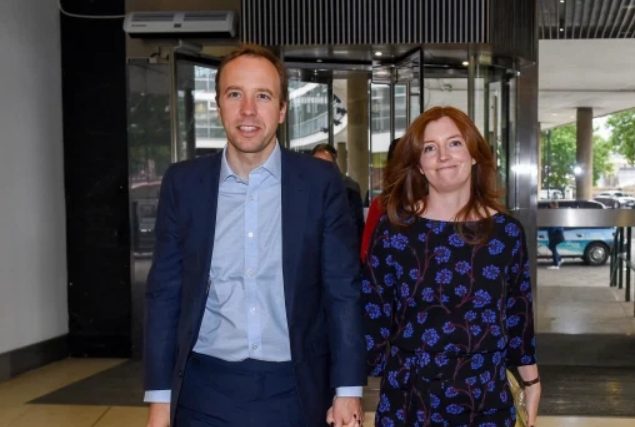 The former British politician and Secretary of State for Health and Social Care Matt Hancock have resigned from his job after pictures of him kissing his girlfriend were uploaded on social media.

Reports gathered from Metro. uk, said that the pictures of the Health Secretary kissing an aide last month sent shockwaves through Westminster on Friday, prompting a major public backlash and widespread calls for him to go.

He had previously refused to resign, with the Prime Minister saying he had accepted an apology and considered the matter closed. 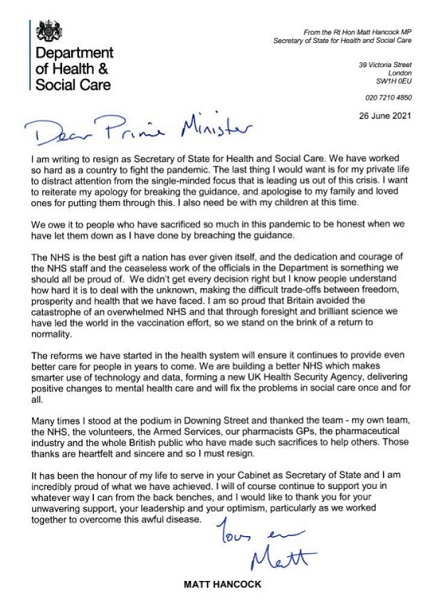 But in a letter to Boris Johnson on Saturday afternoon, the Conservative minister, 42, said that the Government ‘owe it to people who have sacrificed so much in this pandemic to be honest when we have let them down.

Mr Hancock continued: ‘The last thing I would want is for my private life to distract attention from the single-minded focus that is leading us out of this crisis.

‘I want to reiterate my apology for breaking the guidance, and apologise to my family and loved ones for putting them through this. I also need (to) be with my children at this time.’

It follows pictures and video in the Sun newspaper showing Mr Hancock, who is married with three children, kissing married aide Gina Coladangelo.

Meanwhile, there are reports this evening that Mrs Coladangelo will leave her position on the board of the department of health.

The lobbyist and aide told a BBC Radio 4 profile on the politician that the pair met at the Oxford University student radio station, Oxygen FM, where she was a news reader and he a sports reporter.

The Sunday Times is reporting that Mr Hancock told his wife on Thursday that he would be leaving her, after learning about the Sun’s front page image on Friday.

Mr Hancock, who became Health Secretary in 2018, also released a video on Twitter apologising for his conduct.

The CCTV footage was captured on May 6, when guidance on social distancing was still in place and hugging between people from different households not recommended.

In response to the resignation, the PM wrote: ‘You should leave office very proud of what you have achieved – not just in tackling the pandemic, but even before Covid-19 struck us.’

Mr Johnson had refused to sack Mr Hancock, with his spokesman saying the PM considered the matter closed after receiving the West Suffolk MP’s apology on Friday.

He has since been accused of a ‘failure of leadership for not removing Mr Hancock.

Labour’s Sir Keir Starmer tweeted: ‘Matt Hancock is right to resign. But Boris Johnson should have sacked him.’

‘A fish rots from its head. So does this UK Government.’

Liberal Democrat leader Sir Ed Davey also took to social media to write: ‘Matt Hancock’s legacy as Health Secretary will be one of cronyism and failure.

‘And the fact that Boris Johnson thought Hancock could just carry on regardless brings the Prime Minister’s judgement into question once again.’