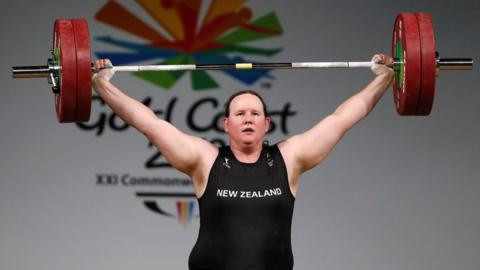 Laurel Hubbard a New Zealand transgender has has become the first ever athlete to compete at Olympics.

In a controversial decisions officials have selected her for the women’s weightlifting team for Tokyo 2020, after qualifying requirements were recently modified.

She will compete in the women’s 87-kg weightlifting category.

Hubbard had previously competed in men’s events before coming out as transgender in 2013 and critics say she has an unfair advantage over other women.

“I am grateful and humbled by the kindness and support that has been given to me by so many New Zealanders,” Hubbard said in a statement issued by the New Zealand Olympic Committee on Monday, June 21.

The 43-year-old became eligible to compete at the Olympics when the International Olympic Committee (IOC) in 2015 changed its rules allowing transgender athletes to compete as a woman if their testosterone levels are below a certain threshold.

Testosterone is a hormone that increases muscle mass.
Critics have pointed to the biological advantages of those who have gone through puberty as males, such as increased bone and muscle density.

Last month, Belgian weightlifter Anna Vanbellinghen, who is competing in the same category, said that if Hubbard were to compete in Tokyo it would be unfair for women and “like a bad joke”.

She said that while she fully supported the transgender community, the principle of inclusion should not be “at the expense of others”.

Anyone that has trained weightlifting at a high level knows this to be true in their bones: this particular situation is unfair to the sport and to the athletes,” she said in May.

“Life-changing opportunities are missed for some athletes – medals and Olympic qualifications – and we are powerless.”

Save Women’s Sport Australasia, an advocacy that is against transgender athletes competing in women’s competitions has also criticised Hubbard’s selection for the Tokyo Games.

“It is flawed policy from the IOC that has allowed the selection of a 43-year-old biological male who identifies as a woman to compete in the female category,” the group said in a statement ahead of Monday’s decision.

But New Zealand’s government have backed her inclusion for the upcoming Olympics.

“As well as being among the world’s best for her event, Laurel has met the IWF eligibility criteria, including those based on IOC Consensus Statement guidelines for transgender athletes,” New Zealand Olympic Committee chief executive Kereyn Smith said.

“We acknowledge that gender identity in sport is a highly sensitive and complex issue requiring a balance between human rights and fairness on the field of play,” he added.

“As the New Zealand team, we have a strong culture of ‘manaaki’ (respect) and inclusion and respect for all.”