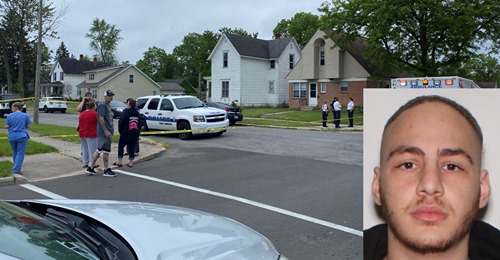 Who is Hancz Barron Suspected Killer Of 3 Children and a woman in Fort Wayne, Indiana Home

Police in Fort Wayne has identified and arrested the man behind the gruesome murder of a woman and 3 children inside a Fort Wayne, Indiana Home.

The suspect identified as Hancz Barron was arrested after the authorities discovered several dead bodies in the house.

The discovery prompted a tip-off for the search for the suspect a 21-year-old Cohen Bennett Hancz-Barronat, who police said was considered “armed and extremely dangerous,” and possibly driving a black 2010 Ford pickup that had been stolen earlier Wednesday morning.

According to a police spokesman Sgt. Jeremy Webb said “It’s a very gruesome scene in there,”

When Did It Happen And His Arrest:

The Police said the incident happened around 5:15 p.m. before they announced his arrest after authorities found him at an apartment complex in Lafayette. The arrest was made through a “joint effort” between FWPD Homicide, Gang and Violent Crimes Unit, Vice and Narcotics Unit, and the Indiana State Police.

Webb said friends and family had identified him as a suspect.

Hancz-Barron was being transported back to Fort Wayne, where he was expected to be booked into the Allen County Jail on four counts of Murder.

A representative from the victims’ family provided a statement to WANE 15 Wednesday:

Neighbors are describing the incident on the corner of Gay and McKee Street that left 3 children and a woman dead this morning as "sickening." @wane15 pic.twitter.com/V7frM9TGjX

A large police presence was at the home throughout midday Wednesday, and residents gathered outside a crime scene. One neighbor called the killings “sickening.”