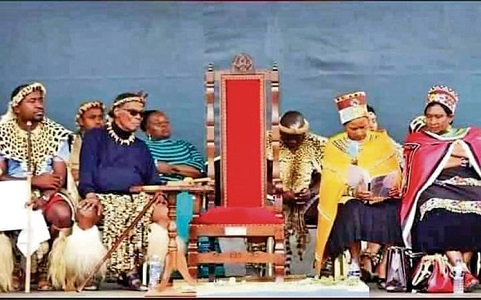 Prince Misuzulu was on May 7th 2021 named the King of the Zulu nation. His appointment as the new Amazulu king was based on late Queen Regent Mantfombi Dlamini Zulu’s will.

The “Will” which was read out by the late queen’s lawyer did not go down well with some family members who objected to the naming of Misuzulu Zulu as the preferred Amazulu King.

Who Is Prince Simakade Zulu?

Prince Simakade Zulu is the first and oldest child of the King. The King had him before he was even King. He was not yet married.

Prince Simakade Zulu, the other faction within the Zulu royal court claims he should have been the King of the Zulu nation instead of Prince Misuzulu.

In accordance with tradition, Prince Simakade is not able to ascend the Zulu Throne. He is a junior member of the Zulu Royal Family, born out of wedlock.

PHOTO: This is Prince Simakade Zulu, the other faction within the Zulu royal court claims he should have been the King of the Zulu nation instead of Prince Misuzulu. However, Prince Mangosuthu Buthelezi has since dismissed their claim. pic.twitter.com/MxSQcxzRRj

Princess Londiwe Zulu a senior member of the late King Goodwill Zwelithini kaBhekuzulu’s Stakeholder Management, part of the faction that opposed the announcement of Prince Misuzulu as successor to the AmaZulu King insisted that the son of the late Monarch, Simakade Zulu, is the King of the AmaZulu nation.

Read Next: What You Need To Know About Prince Thokozani Zulu