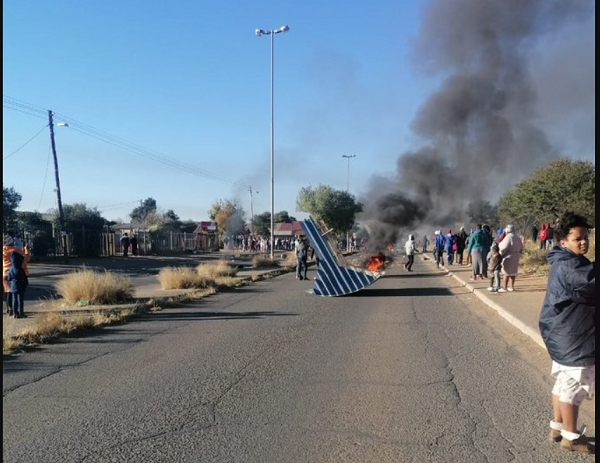 Police have arrested seven persons following a heavy uproar and unrest in Mangaung a metropolitan municipality which is governed by Bloemfontein and surrounding towns in the Free State province of South Africa.

The good people of Mangaung on Monday morning came out of their homes to protest against the Government unfavourable leadership concerning any social ills that are faced by the citizens in the community.

Roads closed in the Bloemfontein township. Tyres are burning#MangaungShutdown pic.twitter.com/qXxp23rlk4

Speaking on Monday was Motantsi Makhele the Free State police spokesperson, says OFM News the group is being charged with public violence and will appear before the Bloemfontein Magistrate’s Court within 48 hours.

The group forms part of protesters that barricaded and blocked George Lubbe, Moshoeshoe, Taelo Moloisiwa, and Dr Belcher Roads amongst others in the metro with burning tyres, rocks and refuse material on Sunday evening ahead of the planned shutdown.

Motorists and commuters in Bloemfontein, Dewetsdorp, Wepener, Thaba’Nchu and Botshabelo are urged to exercise caution and be vigilant as they drive to work this morning.

Police are on the ground.

Moshoeshoe Road in Bloemfontein, a road that on a normal day would be buzzing with traffic as parents take their children to local schools is very quiet as motorists are being intimidated to turn back and some are using smaller streets to try and get to their respective destinations. Police are on the scene.

The arrests come after police assured residents of the Mangaung metro that lawlessness and traffic disruptions will not be tolerated despite people having the right to demonstrate.

The shutdown is being led by a group calling itself the Mangaung Community Concern. The group spearheaded by Themba Zweni and Lily Tsoeu is calling for the disbandment of the Mangaung Metro Council for its failure to steer the metro in the direction of progress following its placement under administration and ongoing failure to allegedly render services or complete projects.

”Bloemfontein was once the City of Roses but today it’s a capital of Potholes. We can’t open our windows as the stench from raw sewerage running on our streets is unbearable and we are no longer certain as to how long are we going to have water as the Municipality owes BloemWater,” says the group.

They say Mangaung is rudderless following the ousting of former Mayor Olly Mlamleli and the situation appears to be worsening.