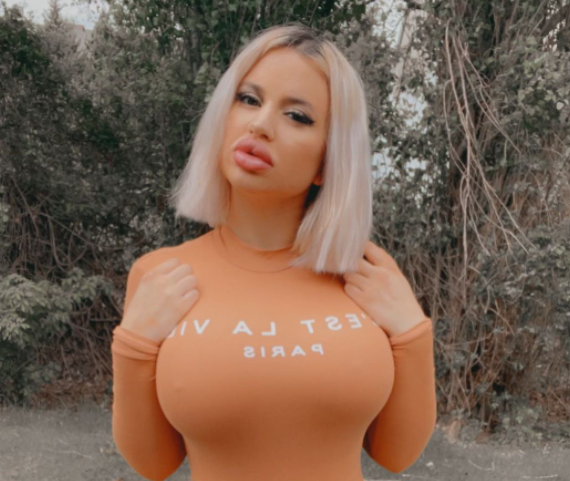 An Austrian drama queen has taken a bold step into her journey of making herself look like a real-life barbie doll.

The young woman identified as Jessy Bunny decided to go for a complete makeover as far as her looks are concerned as she wanted to look like a real-life Barbie.

She said she was born in Germany but later relocated to Austria. When she was younger, she longed to play with dolls, put on makeup and express her feminine side but her parents didn’t allow her to do that.

According to various media publications, she has forked out a whopping $43 000  in an effort to turn herself into a real-life Barbie with cosmetic surgery including liposuction, cheek and chin fillers, and lip fillers.

Reports say, Bunny grew up in a conservative rural village in Germany but because she wanted to evolve and work on her looks, she opted to move to Vienna after completing school in 2019.

While speaking on this Bunny said:

“I was raised in a village in Germany and always wanted to wear makeup and be and act more girly. My parents didn’t like it when I wanted to be more feminine or showed interest in makeup and styling. When I left school, I moved to a bigger city and started to become more feminine.” Moreover, Bunny recalls how she spent $10 000 (R138 330, 60) her parents had saved for her to enlarge her breasts at the age of 18.

“I really loved how my world reacted to them and they gave me a huge confidence boost.” It is now reported that in August last year when she was 19, Jessy underwent a second $10,000 breast enlargement to increase the size of her breasts to a whopping 1300cc K-cup.

An online magazine webite You also reported that the stunning woman has now spent close to half a million as she desperately wanted to look like a ‘eal’ girl. The South African publication also indicated that Bunny had parted ways with R236 000 on botox and liposuction, among other procedures.