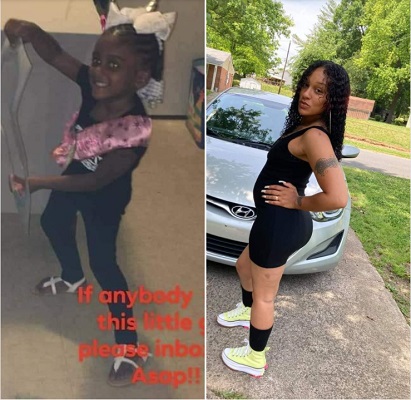 A 31-year-old woman identified as Malikah Diane Bennett has been arrested by Charlotte-Mecklenburg police for the death of her 4-year-old daughter.

Malikah was charged on Friday after human remains believed to belong to her 4-year-old daughter was found at a home in northwest Charlotte.

The 4-year-old daughter also identified as Mejelic Sandez who reportedly went missing for several months was found dead on May 21, 2021, in a wooded area in Charlotte, NC, her decomposed body was found buried near a home on Braden Drive Charlotte, NC.

Reports said before Mejelic disappearance she was last seen with her mother Malikah Diane Moffet.

Detectives went to a home on Braden Drive near Capps Hill Mine were discovered the human remains believed to belong to the missing 4-year-old.

Mrs Bennett has been charged by the police for felony child abuse, inflicting physical injury, felony concealing a death and first-degree murder.

People Reacts To The Tragic Incident

Shawnta Mateen wrote – I’m pissed!!! Why did she still have custody of any of her children after she been to jail 3 times for child abuse? This right here will let you know the system don’t care anything about black kids. All the system want to do is get paid.

Tiffany wrote – And I remember when the oldest two was young she uses to beat on Corey so bad DSS was involved then all the time if she beat and treated her other ones the way I saw her and her mother do Corey they had to be scared.

James Washington wrote – she wanted to go out and suck dick/ be a hoe so bad she killed that baby. Posting pics and enjoying her life knowing damn well she murdered ha baby and buried her.

Rashanna Lovey G Wrote – I’m just wondering how some of y’all blaming the other kids for not speaking up. First of all. It was their mom. She told them not to say anything. They’re raised to listen. Second. You just killed my sister. Who’s to say you won’t do the same to me if I speak up. This is very sad.