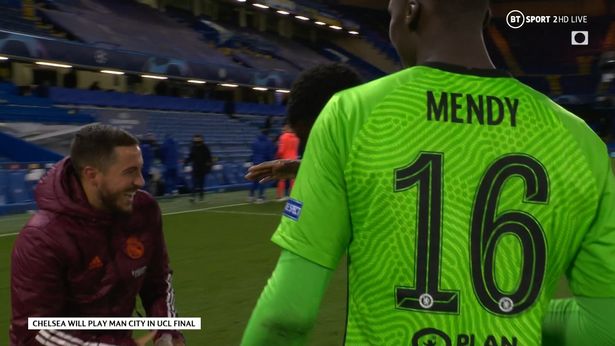 Real Madrid fans are not really happy with Eden Hazard actions after his club side were eliminated from the Champions League on Wednesday night.

The Belgian winger was seen laughing with his former Chelsea teammates after the full-time whistle was blown.

Hazard, who was back at Stamford Bridge for the first time since his massive £90million transfer to Spain in 2019, was seen joking and laughing with his former colleagues full-time.

Madrid lost 2-0 in London, after holding the Blues to a 1-1 draw in Spain.

It marks something of a breaking point for Hazard, who has endured a miserable spell since he signed for the Spanish giants and now both Madrid supporters and the Spanish media appear to be turning on the star.

Los Blancos boss, Zinedine Zidane, had been saving Hazard for the crucial second leg after he was only able to play a few minutes against the Blues in Valdebebas.

However, the plan failed, as Hazard made no impact.

After he was subbed off late in the game, Hazard was seen joking and hugging Frenchman Kurt Zouma. He also shared an intimate moment with Cesar Azpilicueta.