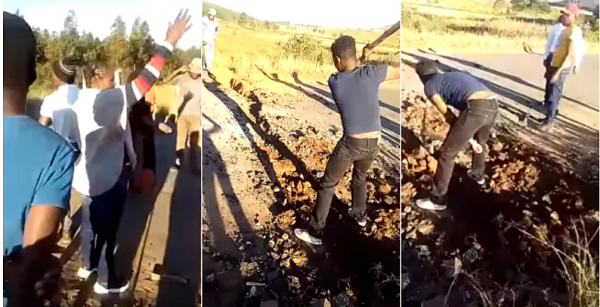 A viral video that has been watched more than 11k times has shown a man out of anger destroying roads while residents applaud him in KwaZulu-Natal.

Reasons behind his actions were not made known, the disgruntled KwaZulu-Natal man seems to have taken his frustration out on the local road.

The video was shared on Facebook by SA Long-Distance Truckers and has since been watched more than 11k times. the community seems to be in full support of the destructive man with some residents even redirecting traffic on his behalf.

Most Facebook users strongly disagree with the man’s vigilante behaviour and took to the comments section to share their thoughts.

Check out some of their comments below:

A Twitter user identified as David Khumalo said: “The level of stupidity will amaze you, the same road you digging is the very road that’s used for eg. emergency vehicles such as ambulances to save you and the community, haulage trucks use the same road to bring in food into your community, I mean the list is endless.”

“So he has a tool in his hands to build. He chooses to destroy. That’s what they need to learn. The world owes you nothing. You have the tools. What you do with them is your choice.”

“Such foolishness, destruction of a public road that assists your local communities and business in the area, this is just a poverty mindset.”