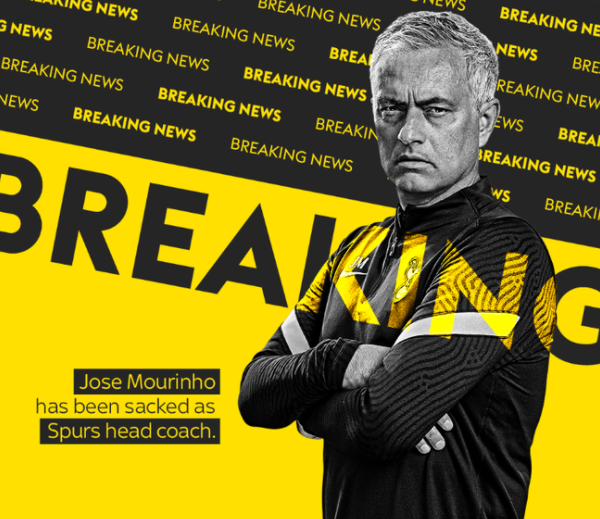 Tottenham Hotspur manager Jose Mourinho has been sacked by the club on Monday.

This is coming just few years after he took over the coaching appointment from Mauricio Pochettino in November 2019.

The club on Monday 18th April 2021 made the confirmation that Mourinho and his coaching staff Joao Sacramento, Nuno Santos, Carlos Lalin and Giovanni Cerra have been relieved of their duties.

Jose Mourinho is fired. He is the first of the European Super League managers to lose their job.

The management said their reasons for sacking him is not related to the league but as a result of their unhappiness with his constant criticism of his own players as well as the club’s performances nosedived under his tenure lately.

In a statement, Chairman, Daniel Levy, said: “Jose and his coaching staff have been with us through some of our most challenging times as a Club. Jose is a true professional who showed enormous resilience during the pandemic. On a personal level, I have enjoyed working with him and regret that things have not worked out as we both had envisaged. He will always be welcome here and we should like to thank him and his coaching staff for their contribution.”

The development was earlier confirmed by former foot-baller-turned expert Gary Linekar. “Jose Mourinho is fired. He is the first of the European Super League managers to lose their job,” Linekar said.

The club Tottenham Hotspur are currently ranked seventh in the Premier League after finishing sixth last season with no chance of qualifying for the Champions League.