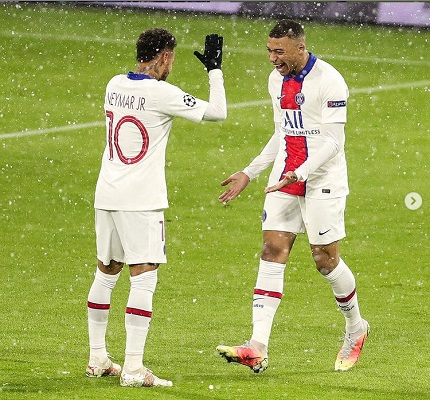 Paris Saint-Germain president Nasser Al-Khelaifi has affirmed that the two superstars in the club Neymar and Mbappe have a long time to stay in the club stating that both of them “have no reason to leave”.

The pair have been in talks to extend their stay at the Parc des Princes, with PSG sporting director Leonardo confirming last week he is hopeful of “good news” on the subject.

Speaking to Sky in Italy on Tuesday night after PSG secured qualification to the Champions League semi-finals on away goals against Bayern Munich, Al-Khelaifi seemed relaxed about the chances of tying down his two-star players to long-term stays.

“I think that next year Neymar will be at Paris Saint-Germain and he will stay here for a long time,” Al-Khelaifi said. “Him and Mbappe have no reason to leave.

“It’s been a fantastic night for us. We could have scored three or four goals, it’s something wonderful. I’m proud of my players.

“Now we’ll aim to win the Champions League. It’s the second year in a row we’re in the semi-finals, it’s a great success.”