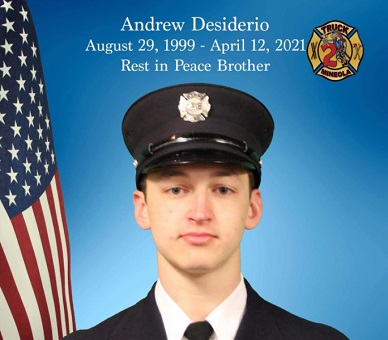 The Mineola Fire Department has lost one of its members. Young firefighter, Andrew Desiderio has sadly passed away at the age of 21. He was reported to have died unexpectedly today April 14 2021.

The news of his death was confirmed on social media today through an official statement released by the Mineola Truck CO.2 – The Workhorse company. His cause of death or what led to his sudden demise was not made known to the public.

Andrew originally joined the Mineola Fire Department family as a member of our junior program in 2013. Andrew worked his way up to a Junior Lieutenant and then joined the ranks of Truck 2 in 2016. Andrew’s dedication to the community did not stop there though.

He grew up in Williston Park and was a Boy Scout in Troop 45, Mineola. As a Scout, he held many leadership positions including the role of Senior Patrol Leader. In 2016 he attained the rank of Eagle Scout.

He was also a Boy Scout in Mineola’s Troop 45. He worked his way to Senior Patrol Leader from 2016-2017 as well as Eagle Scout in 2016. Andrew was currently enrolled in Binghamton and was expected to graduate this year with his BS in Mechanical Engineering. While in Binghamton Andrew spent most of his time in the shop building the school’s formula car. When Andrew was home, he was always on the move.

Andrew started a band and a detailing company that he was just kicking back up for the summer. Around the firehouse, Andrew would pitch in wherever needed. Filling in for members on leader duty, jumping into the kitchen to help cook, painting a picture of Whiskers, writing the company newsletter and much more.

Andrews’ other passion though was going on outdoor adventures. During the summer you could find him at the beach either fishing or boating, he tried to go mountain biking whenever the weather allowed, and he loved to go hiking.

We send our condolences to his family during this difficult time.