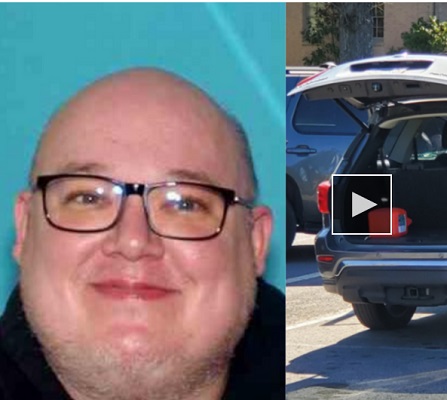 A 36-year-old Nashville man who shot and killed his estranged wife and her in Lebanon Monday morning has been found but deceased.

Lebanon police reports say the man identified as Shaun Varsos broke into the apartment of the wife’s mother on Whispering Oaks Drive around 7:30 and opened fire on them, killing the wife and mother, Deborah Sisco before fleeing the scene in a rented Nissan Pathfinder.

Mr Shaun was later found dead in West Nashville and police believed he died from an apparent self-inflicted gunshot.

BREAKING: Shaun Varsos, 36, the suspect in this morning’s double homicide in Lebanon, TN, is deceased from an apparent self-inflicted gunshot wound. He was found near his home inside an SUV on the side of Harpeth Knoll Rd in Bellevue. pic.twitter.com/Mz2ltHwOSj

One of the victims fired back at Varsos with a weapon and he was injured before leaving the area and driving to Nashville in a rental SUV. Police said they were able to use the rental vehicle’s GPS system and a cell phone to track the suspect.

The motive of the shooting is not yet known but Lebanon police said that all three victims in the case has been involved in a domestic situation over the past several months and had been involved in court battles.

Shaun Varsos was a Manager of Business and product development for the Van Ryder games. He position he was appointed by the company on January 2, 2019.

Shaun was responsible for the development of various products and product lines, marketing and sales activities at Van Ryder Games.

Before his appointment as the manager of product development, Shaun had worked as a contractor for the company for over 6 months.

So Marie Varsos killed me. She lied to me and destroyed me. This is my dying declaration. She broke into our formerly shared home and tried to grab her gun after making me feel incredibly threatened. It escalated things to a terrible confrontation. She lied to and defrauded her work to get paid time off for having Covid even though she didn’t have Covid. 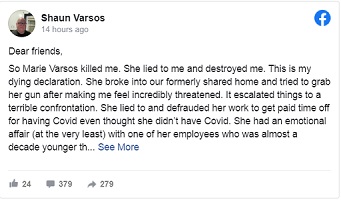 She had an emotional affair (at the very least) with one of her employees who was almost a decade younger than her and became completely infatuated with her, lying to me about where she was spending the night and who she was with. She gaslit me for months about this affair and her communication with her mistress. She committed numerous HIPAA violations including telling me about HIV preventative medication a family member was on that she only found out about because she looked up their medication history without their knowledge. She stole opiates from her work (for me but not at my request, I actually heavily chastised her for it and told her never to do it again). She took my muscle relaxers without my permission so that she could sleep better. She’s a pathological liar. Her family raised her to be. Her mom and brother once conspired to lie about her brother residing with her mother so that he could get out of paying state income taxes.

Her mom had multiple affairs and ended up with one of at least two guys she was cheating on her husband with. They can not be trusted in any way. Ultimately Marie chose to file a false police report about me that took some truth and blew it out of proportion and left out everything she did. She also encouraged me to take my own life and was profoundly destructive with the mental abuse I mentioned above. Ultimately she won and got what she wanted, me being dead. I’m sorry to my friends and family. I couldn’t fight her anymore. I couldn’t live with the abuse and the person I loved most in the world wants me dead.

I had been through a divorce before a done nothing like what I did here. It wasn’t anything like I couldn’t handle the rejection or even the betrayal. I couldn’t handle my abuser getting off free because mental abuse isn’t illegal. I couldn’t handle my abuser getting to live the rest of their life after traumatizing mine irrevocably. I didn’t snap and go after random people. I went after the person who tried to kill me and when she failed at driving me to suicide tried to destroy my life in every other meaningful way. It is my sincere opinion that this was justice, but I paid for my justice with my life.

I’m so sorry I failed so many of you. My mom has my suicide note if you care (she didn’t know this was coming, no one did, but she will know by now). If you don’t I understand. May you all find the peace and happiness I was denied.