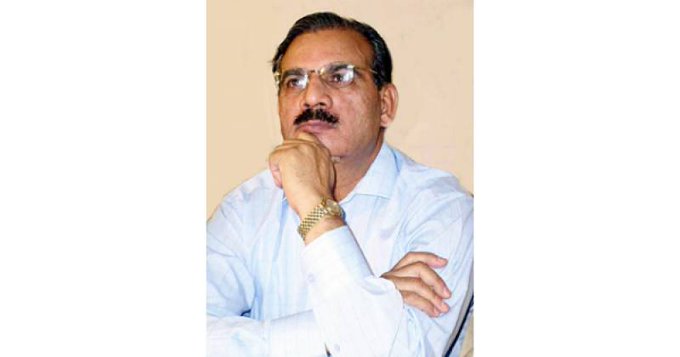 I am saddened to hear about the passing away of the Chief Editor Roznama Khabrain Zia Shahid. Extending my heartfelt condolences to the bereaved family and the staff members of Channel 5 and daily Khabrain. May Allah Almighty increases his ranks in Jannah. Ameen#ZiaShahid

Reports say he was admitted to Shaikh Zayed Hospital two weeks ago. Zia has since been suffering from kidney disease, He died today on Monday night.

He worked in many newspapers in his career. Later, Zia Shahid launched the Khabrain Group of Newspaper. He was chief editor of the group.

Zia was renowned journalists, human rights activists who shared a lot of his talent in the Pakistani media industry.

Zia Shahid took over the family business which has traversed a unique trajectory to one of the top media houses in Pakistan.

The family’s progress essentially has been the progress of its patriarch Zia Shahid. His rise owes to the weakening of the government’s role and control in economic activities that started in the 1980s.

Coupled with an increase in literacy rates, this liberalization and deregulation resulted in an unprecedented expansion of the news media market in Pakistan.

By that time, he had gained huge editorial experience by working with some of the country’s most read newspapers, such as daily Jang and daily Nawa-i-Waqt.

More importantly, he had also established links with a large number of newly rich individuals who did not represent the old feudal and business elites but had made money through trade and such middle class professions as medicine, education and law.

In 1990, he convinced dozens of such individuals to pool in money for bringing out an Urdu language daily newspaper, from Lahore. After the newspaper came out, he started consolidating his control over its finances and management to the resentment of a majority of investors and other members of its editorial staff.

A dispute ensued and he had to leave daily Pakistan.

Soon afterwards, he came up with another innovative idea. He invited prospective reporters and newspaper distributors from across Pakistan to invest small amounts of money and become ‘members’ (read shareholders) in a new newspaper that he intended to bring out.

Some investors who had sided with him during the struggle for control of daily Pakistan also left that newspaper and joined his latest project.

This is how Liberty Papers Private Limited came about with more than 1500 owners. Many of them had invested as little as PKR 1000 in it. The company launched its first newspaper, an Urdu language daily, Khabrain, in 1992.