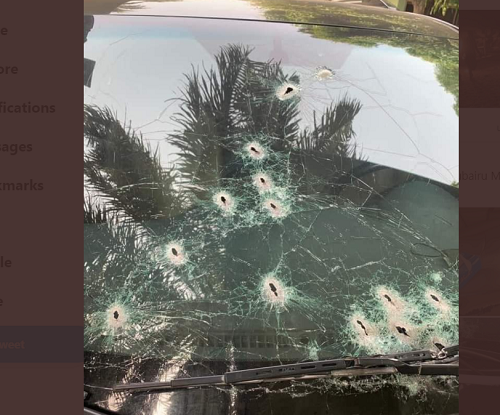 NIGERIA – Latest reports say that the Emir of Birnin-Gwari, of Zubairu Maigwari II, was attacked by hoodlums on his way to Kaduna.

From pictures from the scene of the attack bullet holes where seen on the front windscreen of the car.

It was not clear yet the number of casualties from the incident although a number of persons were said to be injured.

Recently, the Emir had linked the problem of insecurity to homosexuality in the north, he blamed illicit behaviours, particularly sodomy and lesbianism, for insecurity and other woes in the north.

Speaking at the weekend in Kaduna last year, the royal father noted that the present security challenge that touched everybody was man-made. According to him, sodomy and lesbianism openly displayed by the people are greatly responsible for the insecurity in the region.

He remarked that immorality was enough for God to be angry, adding that serious prayers for God’s intervention would remedy the situation.

“We need salvation, and only God can redeem the present situation. No person can do that for us,” he declared. The monarch added that the insecurity in his Birnin Gwari domain had reared its head in the last century, but was nipped in the bud.