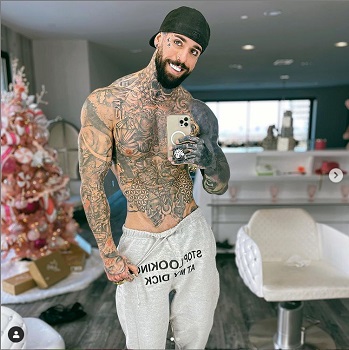 Certified Personal Trainer, Online Coach & Fitness Influencer, Chris Fleming has passed away. Chris Fleming whose real name is Chris Kash was reported to have died today March 5 2021. His cause of death has not been disclosed to the public.

The news of his death was announced through his official Instagram page by his family in an official press release. In the statement, the family revealed that Chris died at Dignity Health, Saint Rose Dominican in Las Vegas where he was receiving treatment for an undisclosed illness.

To the fans and friends of Christopher, on behalf of his mom and dad, his sisters Mallory and Montana, and his wife Italia, I would like to take a moment to thank everyone who has reached out with kind heartfelt words asking about our beautiful baby boy Christopher. Our sweet boy has officially passed on at Dignity Health, Saint Rose Dominican in Las Vegas. In keeping with his wish to be kind to others each and every day, he has donated his organs to those in need, like the hero he is and always will be. He was honoured as a hero by dozens of nurses and staff who lined the halls in tribute, March 4, 2021, at 2:00 p.m. with the Honour Walk at the hospital, on his way to surgery.

Christopher wanted to pay it forward and we have learned his organ donations have saved the lives of 3 people in need and has saved other families from the pain we are feeling.

Our son has taught us love and has shown us what it means to be a true gentleman, an amazing son and brother, husband and a kind soul. We tried our best to teach him growing up to respect and be kind to others and in the end, he became the teacher.

He has made us all proud each and every day. We love you more than anyone will know. We promise to honour you every day, our sweet, sweet Christopher.

For those who are wondering, we will be leaving his IG account active and I ask that only kind words of support be left for him to honour his legacy. I ask that the family please be respected in this time of mourning and that we, his parents Dan and Tammi, his sisters Mallory and Montana, and his wife Toochi, be showered with love in this difficult time.

For those who didn’t know our boy personally, he was the most loving, caring soul who cherished his mother and called her every day, starting with a ‘Hey Momma’ every morning. He adored his sisters Mallory and Montana, who are beyond consoling, and of course his Poms Walter, Frank and Kilo. His wife Toochi, who he lovingly called ‘My Queen’ will be without her King and will need tons of support in this terrible time. Please show respect and love for our boy, as he deserves nothing less. He was beautiful inside and out.

Who Is Chris Fleming?

Chris Fleming is a certified personal trainer, online coach and fitness influencer from Sudbury, ON.

He is a personal trainer with a passion for fitness and nutrition routines that are changing people’s lives one at a time.

Chris specializes in rapid fat loss and hypertrophy of all ages.

He has amazed over one million followers on Instagram.

Chris started his Flemshow TV Youtube channel on October 7 2017 where he posts weekly videos on his training updates.