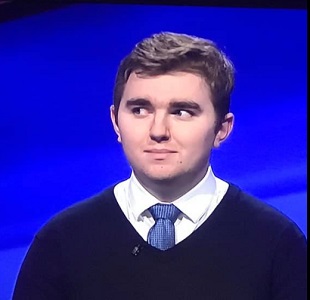 Brayden Smith who attained a lifelong dream as a five-time champion on the popular Jeopardy! television game show, hailed on social media as “Alex’s Last Great Champion” is dead. He was reported to have died today February 12, 2021, at the age of 24. No cause of death was reported at the time of filing this report.

Brayden a 2020 graduate of the University of Nevada, Las Vegas was looking forward to competing in the show’s Tournament of Champions.

Born in Henderson, NV. on September 6, 1996, to the family of Scott and Deborah (Rudy) Smith. He is the second of fours sons. Brayden is of Las Vegas native who dominated the Jeopardy competition, prompting fans to crown him “Alex’s last champion.”

We are heartbroken to share that our dear Brayden Smith recently passed away unexpectedly. We are so grateful that Brayden was able to live out his dream on @jeopardy. pic.twitter.com/e5x18xGcxV

It’s a sad day for the #Jeopardy community. Just heard that former and recent champ Brayden Smith passed away.

I actually enjoyed watching him, and was looking forward to seeing him in the Tourney of Champions.

He bagged his degree in economics from the University of Nevada, Las Vegas and had intended to attend law school to become an attorney for the federal government.