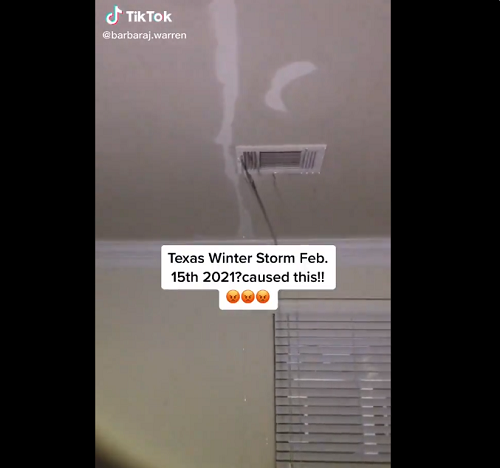 Texas resident shares a horrifying video of water going through the ceiling fan into her bedroom. This was after a severe weather storm affected the area.

The woman in the video said that she took the video at exactly 11:11 after a weather storm attacked her home in Texas.

She said many videos emerged earlier were a lot of people where making fond of the unfortunate incident that happened to the residents in Texas who had their houses affected during the storm.

“As you can see my apartment has been flooded, from what I understand this is water coming from a broken line that leads to the fire extinguisher system”

She said that the water was coming from out ceiling fans and the ceiling itself.

The video was really emotional, from the video it can be seen that the entire building was completely flooded and seriously leaking from the walls to the ceiling.

She ad to secure the floor with a bucket to avoid flooding the entire room.

Watch the video below..

This is horrifying. I pray none of y’all have to deal with this. 😭❤️🙏🏾 pic.twitter.com/zz25qK7edc

As at the times she shares the video, she revealed that power lines were also affected, resulting in a  total blackout in the area. it was indeed a horrifying moment for the people living in the area.