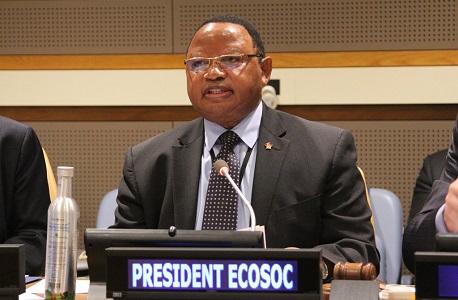 Zimbabwe’s President Mnangagwa appointed the country’s ambassador to the UN Dr Frederick Shava as the new Minister of Foreign Affairs and International Trade. The new ministerial appointment was made date February 8 2021. According to the Chief Secretary to the President and Cabinet Dr Misheck Sibanda, they were done in terms of Sections 100 (1) and (2) of the Constitution.

So in this post, we are going to give a brief biography and profile about Dr Frederick Shava.

5 Things You Need To Know About Dr Frederick Shava

1. Dr Frederick Shava whose full name is Frederick Shava was a Zimbabwean politician who got a ministerial appointment from the President as the country’s Minister of Foreign Affairs and International Trade. He replaced Dr Sibusiso Moyo, who was the Former Foreign Affairs and International Trade Minister. Dr Sibusiso Moyo died on 2oth January 2021 from COVID-19 complications.

2. Before his appointment as the Foreign Affairs minister, Frederick Shava served as Zimbabwe’s representative to the United Nations where he was the President of the UN Economic and Social Affairs Council.

3. He was also part of Robert Mugabe’s government. He served during Mugabe’s regime as the Minister of Labour, Manpower Planning and Development from 1981 to 1986 and Minister of State for Political Affairs in 1987.

4. On May 11, 2007, He was appointed by the then President Robert Mugabe as an ambassador for Zimbabwe in China.

5. He bagged his Bachelor of Science in biology degree from the University of Zimbabwe. Frederick Shava holds a Doctor of Philosophy and a Master of Philosophy in parasitology from Royal Holloway College.