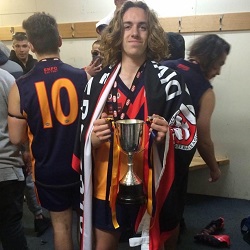 21-year-old Mitchell Celantano has been identified as the man who got drowned while swimming in Gold Coast canal.

The body of the young Victorian tourist was pulled out from a Gold Coast canal after he failed to return from an early-morning swim.

According to the police, Mitchell visited Queensland on holiday and had been staying with a group of friends at a nearby home since New Year’s Eve.

The East Keilor FC club announced via their official Facebook page that Mitchell Celantano has passed on.

They described Mitchell as a popular player and member of their club.

Read Excerpts: The East Keilor Football Club family has suffered an enormous loss with the passing of Mitchell on the Gold Coast on Tuesday morning 5th of January.
Mitch was a popular player and member of our club and his passing will leave a void across many generations of our EKFC family.

The Celantano family is linked right through the history of EKFC with his Grandfather Murray being a former junior coach, Grandmother Jean a club helper, as well as his parents Richie and Raelene who are so well known to so many at the club. Mitch’s brother Mason is a junior player at our club, so the impact of Mitch’s passing is far-reaching within our community.
Our love and thoughts are with the Celantano family and also the lads that were with Mitch on the Gold Coast at this very difficult time.