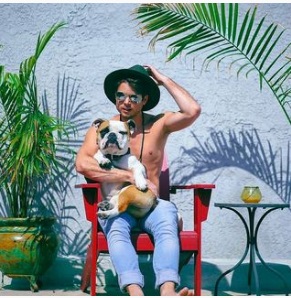 Information reaching our news desk has it that young American actor, film and television producer, Drew Osborne has passed away. He was reported to have died yesterday January 6th 20202 at the age of 29. Circumstances surrounding his death or what led to his sudden demise was not made known to the public as at the time of filing this report.

Actress Lucy Hale took to her Instagram account to make a lengthy post about the memories she shared with Drew and also confirming he has passed on.

According to the star actress, Drew died Monday at his Los Angeles home at age 29 after struggling with addiction. 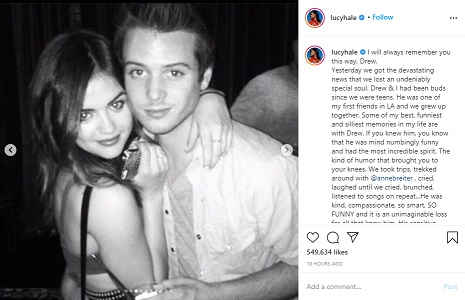 I will always remember you this way, Drew. Yesterday we got the devastating news that we lost an undeniably special soul. Drew & I had been buds since we were teens. He was one of my first friends in LA and we grew up together. Some of my best, funniest and silliest memories in my life are with Drew.

If you knew him, you know that he was mind-numbingly funny and had the most incredible spirit. The kind of humour that brought you to your knees. We took trips, trekked around with @annebreiter, cried, laughed until we cried, brunched, listened to songs on repeat…He was kind, compassionate, so smart, SO FUNNY and it is an unimaginable loss for all that knew him. His sensitive heart and empathetic way about him did not go unnoticed.

Very rarely do you have a connection with someone where you don’t have to say a word? I could sit in silence with Drew and he would just get it. He ALWAYS let the people he loved know how special they were. Even when he couldn’t see how magnificent he was, he made others feel seen and heard. Thank you for the ear I needed when I was struggling, the shoulder I needed when I felt like no one understood me.

I’ll never be able to hear Rihanna and not think of the million replays of the songs we had over the years. Thank you for your friendship and unwavering support. I will miss you forever and I’ll see you on the other side sweet one and I know you are finally at peace, please send out prayers for his family (his amazing brother Brandon & mother Delaney) who need them & for my sweet.

Drew’s brief biography on IMDB described him as an energetic young actor who moved to Los Angeles, California with his family in the fall of 2003. His real passion is acting, but he also enjoys rock climbing, swimming and riding dirt bikes in the mountains alongside his Dad and three dogs.