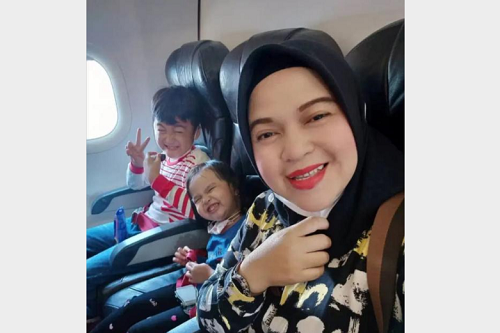 Jakarta – Ratih Windania and her children smile at the camera, looking forward to the flight home to Borneo (Indonesia).

The pregnant mum made a chilling Instagram post moments before her plane vanished and crashed into the sea.

Ratih Windania is one of 62 people feared dead on board Sriwijaya Air Flight SJ 182 after the plane disappeared following its departure from Jakarta, Indonesia, on Saturday.

She posted on Instagram from the airport before boarding the flight.

“Bye-bye family. We’re heading home for now,” she wrote on her Instagram story with a photo of people wearing face masks, presumably her relatives, at the airport and two emojis blowing kisses, according to local news outlet Serambi Indonesia.

It was the family’s last sign of life. Shortly after taking off from Jakarta, flight SJ182 crashes into the sea.

The message was sent just before they boarded a plane from the Indonesian capital on Saturday that crashed into the sea minutes after take-off, carrying 62 passengers and crew.

“Pray for us,” her brother Irfansyah Riyanto posted on Instagram with a picture of the family.

Like dozens of other desperate relatives, Irfansyah rushed to Jakarta’s Soekarno Hatta airport late on Saturday. On Sunday, he was still hoping for good news about his sister and four other family members on the flight, including his parents.

“We feel powerless, we can only wait and hope to have any information soon,” Irfansyah told reporters.

The Boeing 737-500 was in the air for four minutes when it suddenly disappeared from the radar. The fate of the 62 people on board was uncertain – until yesterday debris and corpses were found in the sea off the coast of Java.

The Sriwijaya Aeroplane left Jakarta 30 minutes late due to heavy rain. Flight data shows that shortly thereafter, she lost more than 3,300 meters of altitude within a minute. Fishermen reported an explosion over the sea.

How could this happen? One hopes for clues from the evaluation of the flight recorder.

It is considered unlikely that there will be survivors. Rescue teams were in action in the disaster area off the coast of Java.

The military searched with ships and helicopters. As data from the Internet service Flightradar24 showed, the machine had lost more than 3,300 meters of altitude within one minute about four minutes after taking off. Then she disappeared. Fishermen had reported hearing an explosion.

The first debris was later discovered between the islands of Laki Island and Lancang Island.

The local low-cost airline’s passenger plane was en route to Pontianak on the island of Borneo on Saturday morning when it disappeared from the radar just four minutes after taking off from the capital Jakarta. 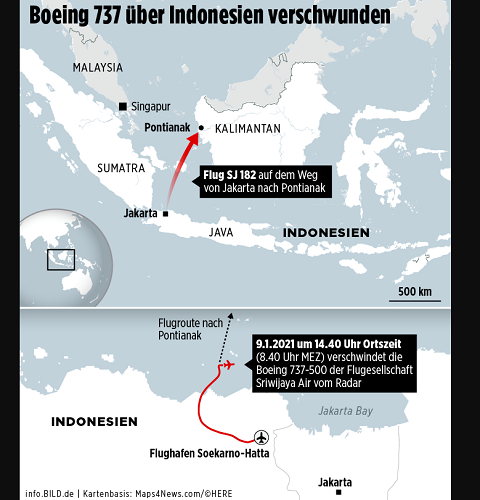