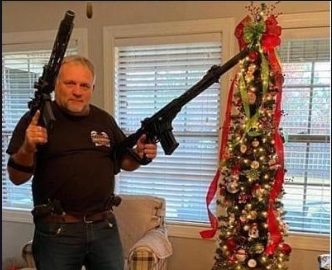 Kevin Greeson has been identified as the Alabama who lost his life during the rioting and protest that rocked the U.S Capitol Wednesday. Kevin 55-year-old was among the four people who died at the Capitol Hill when Donald Trump’s stormed the building, three died of medical complications while a woman identified as Ashli Babbit was shot and killed inside the U.S Capitol building.

Reports from sources claimed that Kevin died after accidentally shocking himself with a taser, which caused him to have a heart attack and also his family members also confirmed he suffered a heart attack.

The family described Greyson as a supporter of President Donald Trump but maintained he wasn’t there to participate in the rioting inside the Capitol. A social media account featuring a profile photo of Greeson recently echoed a message by a militia group and added: “I’m in.. call me I have guns and ammo!”

Contee identified the other two as a 50-year-old man from Ringtown, Pennsylvania and a 34-year-old woman from Kennesaw, Georgia. The chief said the three were on the grounds of the Capitol when they experienced their medical emergencies.

According to his wife, Kristi in an official statement made available to WKRG, Kevin had a history of high blood pressure.

Excerpts From The Statement

“On behalf of the family of Kevin Greeson:

Kevin was a wonderful father and husband who loved life. He loved to ride motorcycles, he loved his job and his coworkers, and he loved his dogs.

Kevin was an advocate of President Trump and attended the event on January 6, 2021, to show his support. He was excited to be there to experience this event- he was not there to participate in violence or rioting, nor did he condone such actions.