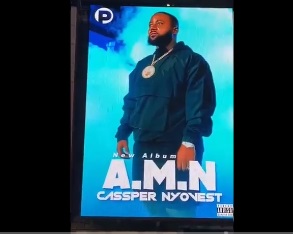 South African rapper, Cassper Nyovest got an early birthday surprise as his 5th studio album, Any Minute Now (AMN) was spotted on a billboard in Times Square, New York City.

The rapper took to his Twitter handle to share the video of the new development and described it as an early birthday present ahead of his 30th birthday celebration.

“Wow wow wow thank you .@BridgeBossTLee!!!! From on now!!! I demand that you call me #TimeSquareCass,” the rapper captioned the video.