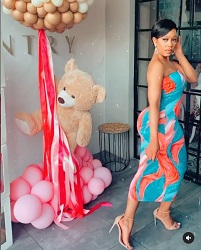 Kings Of Joburg actress Buhle Samuels has gotten the attention of Twitter after a video of her softly dancing and twerking to the viral amapiano song “John Vuli Gate“.

The video which has over five thousand views on Twitter was taken from Buhle’s Instagram Stories. The actress was seen dressed in a body-hugging pastel print dress and baby pink high heels.

John Vuli Gate song was released on October 2020 by Mapara A Jazz alongside Ntosh Gazi and Calona. Ever since it’s release it has been trending with a video challenge which goes with a hashtag #JohnVuliGate.

Sporting a pixie cut hair-do, Buhle could be seen dancing to John Vuli Gate, adding her contribution to the viral #JohnVuliGateChallenge that has seen the likes of Sbahle Mpisane and several others participate.

The video caught the attention of many as they were commenting on her body and her dance moves.

Watch the video below:

Me after seeing the Buhle Samuels video – pic.twitter.com/XMwkjcrUgS

“I’d give up everything for buhle samuels “😭 says your boyfriend 🙌 mojolo pic.twitter.com/B5POmrbEve