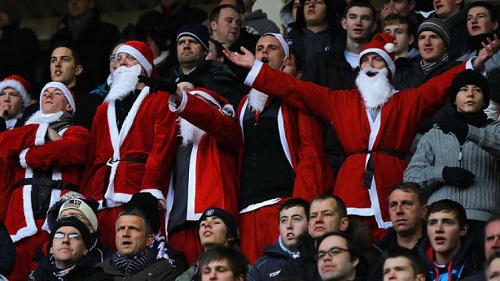 The match titled Boxing Day has returned to the tighter competition in the Premier League 2020-2021 season. This is one of the charms and uniqueness of English football.

In its history, Boxing Day is one of the traditions in celebrating Christmas that has nothing to do with football. This moment was held the day after Christmas Eve, which was filled with gift exchanging events.

In the past, Boxing Day was a holiday for servants or workers. They then receive gifts from the boss or the company they work for.

Regarding football, the English Football Federation (FA) has popularized the Boxing Day tradition since 1860. They deliberately held a match on December 26 to provide entertainment to people who enjoy holidays.

This tradition has continued until now when football has become an industry. Even though the Boxing Day period often invites pros and cons because it makes players tired.

However, the Boxing Day period in this season will be a little different. This cannot be separated from the conditions currently sweeping the world.

Here are four differences that will be presented on Boxing Day for the 2020-2021 season:

1. Taking place during a pandemic

One of the things that will make Boxing Day this year is the ongoing pandemic. The number of positive cases of coronavirus in the UK has indeed increased again.

This makes human movement restricted by strict protocols. The players and supporters will certainly have a very different experience on Boxing Day this year.

Premier League clubs have also abandoned some traditions of celebrating Christmas for the same reason. The meaning of boxing boy becomes less enjoyable.

2. The stadium will not be filled with supporters

Boxing day is actually a moment to gather with loved ones. It is not surprising that at this moment the stadium was chosen as a place to gather and at the same time support your favourite team to compete.

However, such a scene will not happen this year. The British government still limits the number of supporters allowed to attend the stadium.

There are even some areas that are still not allowed to bring spectators to the stadium. This will certainly make the boxing day feel bland even though the supporters can still watch their teams compete on the television screen.

3. Arsenal vs Chelsea first on Boxing Day in 19 years

Premier League operators do not arbitrarily arrange schedules during the boxing day period. All the matches that take place on 26 December are distinctive.

The Premier League usually pairs two teams with a network that is not too far away. This is in order to make it easier for the audience of both teams to go to support their favorite team.

Even so, the Premier League very rarely brings together two city teams with fierce rivalries in boxing day matches. One of them is the London Derby between Arsenal and Chelsea.

4. There are no half-season champions yet

Boxing day is usually held when the Premier League enters its 18th or 19th week. This means that the competition has been running halfway so that there is a half-season champion.

But that didn’t happen this year. The delay in the 2020-2021 season due to the pandemic period means that the new Premier League will play its 15th week on boxing day.

Even though the status of the half-season champion when Christmas arrives can be a sign of the end of the competition. Usually, the club that holds the title during the Christmas celebration will win the title.

Last season Liverpool won the half of the season when Christmas celebrations arrived. The Reds also maintained their top position until the end of the competition.

It’s Business As Usual! – Klopp Keeps Hope High Ahead Of The Match Against Tottenham