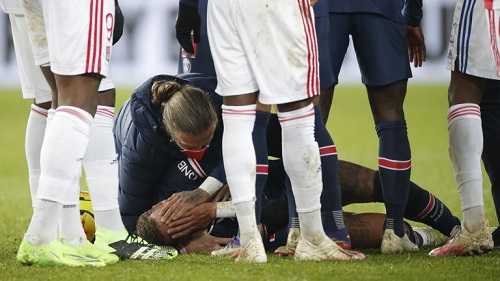 Football player, Neymar suffered a brutal kick and left the PSG game crying and on a stretcher, The  Parisian team lost 1 to 0 against Lyon this Sunday and the Brazilian was injured with seconds remaining until the end of the match.

The Parisian team lost 1 to 0 against Lyon this Sunday and the Brazilian was injured with seconds remaining until the end of the match.

He had to be removed on a stretcher, and with clear gestures of pain, after suffering a hard kick on his left leg in the final moments of the defeat of his team, Paris Saint-Germain (PSG) , at home against Lyon for 1 to 0, in a match of the 14th day of the French league championship.

The tough action of the visitor Thiago Mendes , who was sent off after the referee reviewed the action on a monitor when called by the VAR , occurred in the 95th minute when the Brazilian forward had left two players on the road and was he was preparing to do the same with his compatriot.

Medes knocked down Neymar , who had the misfortune that his left foot was between the legs of his rival. Immediately, he made gestures of pain and raised his arms asking for assistance. After a few minutes of being treated on the field, and with tears in his eyes, he had to be removed on a stretcher, with his arms covering his face on the way to the locker room.

So far there has not been an official medical report although judging by the pain gestures of the former Barcelona, ​​this could be a serious injury. One more in his career. The last one had been a month ago when due to a problem in the adductors he had to be called off from the Brazilian team for the double round of the South American Qualifiers.

The previous serious one had been in 2019, just before the Copa América , when he suffered a ligament tear in his right ankle during a friendly against Peru and was marginalized from the most important national team tournament in South American football.

Due to the defeat against Lyon , who celebrated Kadewere’s goal in the 35th minute of the first half, PSG was third in the table and although it is barely 14 games, this could be the season in which some team finally present fight to the Parisian team. At the moment the leaders are Lyon and Lille with 29 points, although Olympique de Marseille has 27 points and two games pending. For its part, the painting conducted by Thomas Tuchel boasts 28.