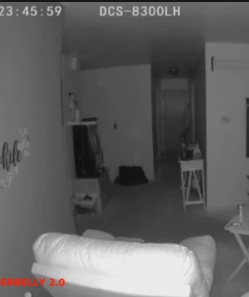 A woman a shocking video online showing moments a ghost described as “Black Tentacles” came out of her baby’s room.

The home in Milwaukee, Wisconsin, is inhabited only by the woman and her baby and the mum was petrified when CCTV footage showed a shadowy figure poke its head around a doorway in the home. The dark human-shaped object seemed to be looking to check if the coast is clear.

The mum shared the video on the r/ghosts Reddit forum and begged for advice.

She wrote: “Please help I don’t know what this is.

“It was in my baby’s room but when I went to check nobody was there.”

Some who watched the video declared that as the figure leered out of the doorway, “tentacle” fingers are visible gripping the sides.

The creepy video, which was recorded on November 7, has been watched by thousands after it was uploaded on YouTube by the popular conspiracy theory channel The Hidden Underbelly 2.0.

Describing the “creepy” scene, the YouTuber said: “In this video, we have footage of this entity that pops its head around the corner.”

He continued: “On first glance of this footage, it is easy to think that this is just somebody looking out of the room and then closing the door behind him.

“You can see this entity doesn’t have hands it has something like tentacles, black tentacles.

“Now the witness states there is nobody in the home but her and her small baby, so what’s alarming is this thing looks out to make sure that there is nobody around and then closes the door behind it.”

He advised that the woman move out if she couldn’t get anyone in to take a look.

Other viewers said the footage gave them chills.

Someone else commented: “Creepy! Watching on my phone, now I’m headed for my computer for a better and bigger view. It made me shiver.”

More sceptical people said the figure simply looked like an ordinary human person, but it was pointed out that the woman lives in the house alone with her child.

One wrote: “No tentacle insight whatsoever. It’s a man with short black hair.”