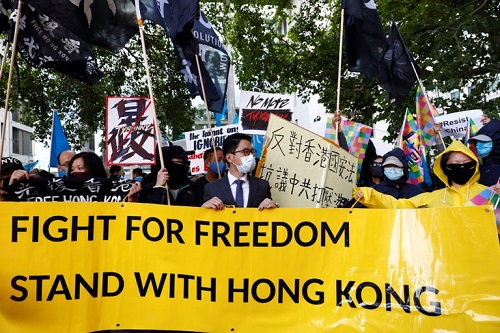 Germany has accused China of “undermining freedom of speech” after ousting four pro-democracy lawmakers in Hong Kong. The incident escalated in the last hours when the opposition bloc in the semi-automatic region announced that its colleagues were expelled as a sign.

The head of the rotating presidency of the European Union (EU) Germany on Wednesday criticized China for firing several pro-democracy opposition lawmakers from a Hong Kong city council meeting.

A spokesman for the Foreign Ministry said the decision to remove four members of the opposition from Hong Kong’s legislative council was the latest step in a “deeply troubling” trend that aimed to “undermine pluralism and freedom of expression.”.

The Chinese parliament previously adopted a resolution allowing the city executive to expel lawmakers who are deemed to be defending Hong Kong’s independence, colluding with foreign forces or threatening national security, without going through the courts.

They are the parliamentarians of the Civic Party Alvin Yeung Ngok-kiu, Kwok Ka-ki and Dennis Kwok , together with the also deputy Kenneth Leung , who had already been vetted to attend the legislative elections before they were postponed until September next year.

Shortly thereafter, the local government announced the removal of four assembly members who had previously been banned from running for re-election because the authorities considered their pledge of allegiance to Hong Kong to be insincere.

“Hong Kong citizens have the right to free and fair elections and the freedoms and rights guaranteed in the Basic Law, ” said the spokesman for the German Foreign Ministry.

“Those rights must be respected and Hong Kong’s high degree of autonomy must be preserved,” he added, recalling that China had made an international commitment to do so.