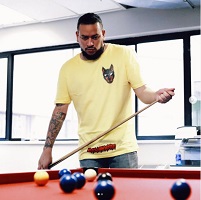 Undertaker real name Mark Calaway, returned at Survivor Series this Sunday for his ‘Final Farewell’ and he was celebrated by many celebrities around the world.

One of them who spoke about Undertaker’s retirement was South African rapper, AKA. Reacting to Undertakers exit from the wrestling scene, AKA via his official instagram regretted that “Dead Man” will greatly be missed more especially his iconic entrance.

Thank You, Undertaker, The ICON of all ICONS wwe #survivorseries … can’t believe I will never see that entrance again. #undertaker30 .. Thank You, Vince McMahon, what a story, what a ride, he wrote.

Undertaker had earlier this year announced his retirement from WWE – but admitted Vince McMahon could still change his mind.