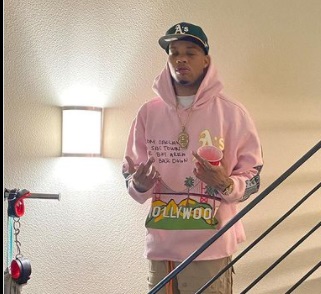 Information reaching our news desk has it that popular Bay rapper, Lil Yase has passed away. According to reports, Lil Yase was shot and killed yesterday night during a shooting in San Francisco.

Who Is Lil Yase? Few Things You Need To Know About Him

Born Mark Antonyyo Alexander in 1995, rapper Lil Yase came to the limelight of the entertainment industry by making videos of his songs on a borrowed iPad when he was 18.

Living in Sunnydale, a rougher industrial neighbourhood outside of San Francisco that included the city’s largest housing project, Lil Yase became affiliated with a crop of talented Bay Area rappers who included Llama Llama, Sage the Gemini, and Yatta.

He first came to regional recognition in 2015 with the release of his single and video “Get It In,” which he quickly followed up with additional singles like “Bum Bitch,” “Worst Way,” and “Furl.” Constant activity eventually made a name for the rapper, with “Get It In” receiving an all-star remix treatment in a new version with appearances from Nef the Pharaoh, G-Val, and other Yase peers.

A string of other videos, singles, and mixtape appearances followed in 2016, including Yase’s own summer mixtape From the Block to Alot. In 2017 he returned with What a Time 2 Grind, a collaborative mixtape with G-Val, as well as solo singles such as “No Diss.”