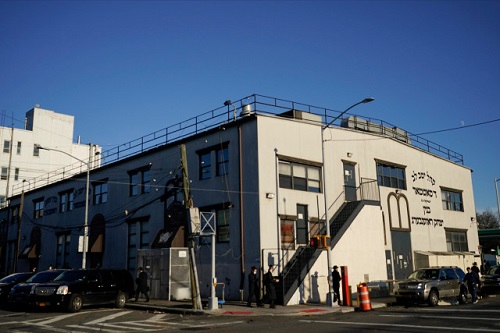 This is a footage of a Hasidic wedding held last week on November 8, 2020, inside a Brooklyn synagogue as NYC was coping with a surge in coronavirus cases.

City Hall has fined $15,000 to a Brooklyn Synagogue for violating social distance rules by hosting thousands of people at the secret wedding of the grandson of a senior religious official in the Hasidic community, Mayor Bill de Blasio revealed late Monday.

Hizzoner announced the fine and summons the day after The Post exposed how thousands packed into the Yetev Lev temple in South Williamsburg on Nov. 8 — dancing and singing at the top of their lungs with nary a mask insight as they celebrate the nuptials of Yoel Teitelbaum, the grandson of Satmar Grand Rabbi Aaron Teitelbaum.

“That’s just not acceptable, I mean, we’ve been through so much,” de Blasio told New York 1’s Errol Louis during his regular Monday appearance on ‘Inside City Hall.’ “This was amazingly irresponsible, just unacceptable.”

He said that while it was unclear how many people had gathered at the 7,000-seat Satmar schul in South Williamsburg, it was clear that the social distancing measures had been severely violated.

The Post has received several videos of the crowd and found that large-scale arrangements had been made by the organizers to prevent the wedding news from reaching City Hall after officials held a similar celebration for the rival Satmar’s grandson, fearing a closed-door rally could spark a new coronavirus surge in the city.

“There appeared to be a real effort to conceal it which is absolutely unacceptable,” de Blasio told Louis. “There will be a summons for $15,000 immediately for that site and there could be additional consequences quite soon as well.”