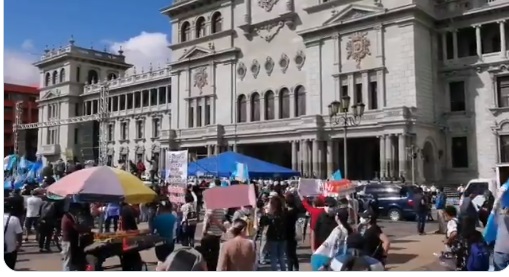 In Guatemala, angry protesters set fire to the Congress building, demanding the resignation of President Alejandro Giammatei following the approval of a budget-cutting on education and health sector.

Guatemala’s vice president said on Friday that he had asked President Alejandro Giammate to resign with him “for the good of the country” following the passage of a budget that has angered the impoverished Central American nation.

“For the sake of the country, I asked him to submit our resignations together,” Guillermo Castillo said in a statement posted on social media.

He also reportedly told the president that “everything is not right” and acknowledged the tension between his “head of state”.

Dr. Giammattei, , 64, came to power in January, vowing to crack down on corruption and fight organized crime.

But during his presidency, controversy over the management of the coronavirus, particularly in the country’s hospitals, prevailed.

He also spoke publicly with his vice president, who said in May that the two had secretly clashed over the best response to the Covid-19 epidemic.

Guatemala’s Congress, dominated by conservative pro-government parties, this week approved a budget of nearly $ 13 billion, the largest in the country’s history.