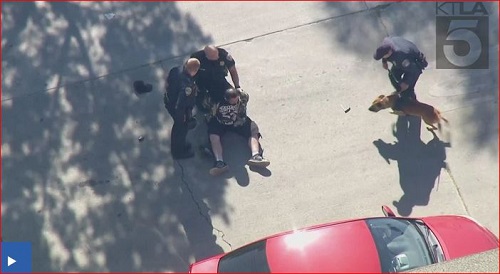 The driver, who was leading the police on a hot pursuit from Joshua Tree to Los Angeles County,was tackled by an officer in Wilmington and was arrested on Wednesday morning.

California Highway Patrol launched at the Joshua Tree Highway at 9 a.m. On the 15th. The drivers came out when the driver stopped the march, officials say.

The driver continued north on Highway 405, entering Carson and Torrance, before exiting the Highway Avenue. The pursuit suspect immediately returned to the highway leading south, the aerial video showed.

The driver stopped there, and two people, including a woman holding a child, approached the car. One person came out as police surrounded the SUV.

During the boxing match between the officers, the driver tried to get out of the SUV, but finally stopped and walked out.

While chasing the suspect on foot, an officer slipped the planter on the sidewalk, and the suspect continued to run.

Eventually, the suspect was prosecuted by the officer and arrested.