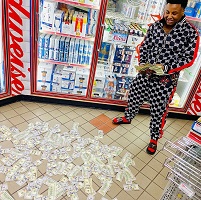 popular Alabama artist HoneyKombBrazy was shot at while on Instagram live two days after being released from prison. According to the artist Instagram, he was able to defend himself and make it out of the incident. According to reports, Honeycomb was shot 8 times.

Honeykomb Brazy is alive!!. Reacting to the near-death shooting, the rapper posted and shared the video on his Instagram page and posted “They tried to creep a nigga today. We turned that bitch to the 4th of July doe!”.

Honeykomb Brazy did not reveal those behind the shooting or why they tried to take his life.

Watch The Moment Honeykom Brazy Was Shot While On IG Live

Just recently American rapper and songwriter, King Von was shot and killed after a  fight between Quando Rondo crew & King Von Crew Broke out outside a downtown Atlanta nightclub.