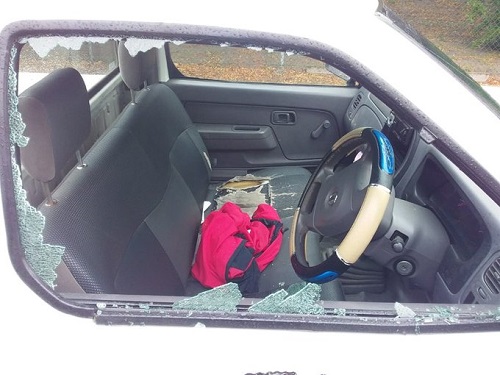 The EFF said six of its supporters were injured and a yard was damaged in a clash near Brackenfell High School earlier this week.

The party’s state chairman, Melikhaya Ego, said a woman now known as Sibongile Nkasay had been hit with a baseball bat, others had been kicked, and rocks and stones had been thrown.

Xego said the party’s representatives had already begun talks with the school when events became violent on Monday.

The controversy was sparked by a private matric party. The claim has been made that only white pupils and some teachers attended the party.

The school’s counter-claim on its Facebook page was that the party was arranged privately. It was not a formal matric farewell and was attended by 42 out of 254 matrics.

‘The event was open for everyone,’ Brackenfell resident says as community clashes with EFF

It said the school promotes non-racialism and appealed to parents to not behave in any way “that would put the school under any pressure”.

On Tuesday, the tensions appeared to have abated, with police parked around the perimeter of the school, and a private security company’s vehicle parked within the police cordon outside the school’s gates.

A group of mostly men had gathered at a distance under a tree at the corner of Rogland Road and Goede Hoop Road.

A police officer patrolled the road with a partner, checking the credentials of everyone walking inside the cordon.

The Western Cape education department reiterated that the event was not a school function only for white people.

Education MEC Debbie Schäfer said, if this was the case, the department would have acted immediately against the school.

“Firstly, had the media reports been true that this was a “whites only” matric function organised by the school, the WCED would most certainly have acted against the school immediately. This would have been a violation of our Constitution,” said Schäfer in a statement.

“However, the school did not organise, host, arrange or endorse this event. It was a private party for 42 of the 254 matriculants in that school year.”

For this reason, it was “nonsensical” to suggest the department charge or suspend the principal or teachers, she continued.

“Whether some teachers attended as guests or not, it is not relevant. They were within their rights to attend a dinner at the invitation of a parent.”

Schäfer set out the programmes the provincial government had put in place to address racism, discrimination and exclusion, which included getting feedback from representative councils of learners.

She said that schools had to change their codes of conduct, where necessary, on topics which include permissible hairstyles, and communicate changes to the codes of conduct.

However, the department had been told that the changes had not always been communicated in some schools.

The Western Cape government, with its DA majority, also condemned the EFF for its part in the confrontation, which came as parties prepare for by-elections.

The party became embroiled in further controversy when it tweeted: “The Nazis had the brown shirts that went around terrorising minorities. South Africa has the red shirts. #BrackenfellHigh,” a comparison by which the EFF was appalled.

Senior EFF member and MP Mbuyiseni Ndlozi labelled the comparison “a monument of their stupidity”.

The ANC in the province called the confrontation “disgusting” and rejected explanations that the function was a private party, and that the “brawl” on Monday was spontaneous.

ANC MPL Khalid Sayed blamed a lack of clear policy for the “burning keg of gun powder waiting to go off”.

He also alleged that “right-wing elements aligned to the DA” hijacked Monday’s event.

“Now the provincial government has to account for the street fight, where various people came with dangerous weapons and incited the resulting brawl,” he said, calling for clear policies on non-racialism, and for the pupils to be given space to complete a difficult year.

Western Cape police spokesperson Sergeant Noloyiso Rwexana said a case of public violence was opened for investigation and a 39-year-old suspect was arrested for firing an airgun.

He is due to appear in the Kuils River Magistrate’s Court on Wednesday.

Meanwhile, the school governing body’s (SGB) attempt to be granted an urgent interdict against the EFF’s protests failed on Tuesday.

The school’s SGB, however, will get another chance to argue its case when the matter is argued in full in the Western Cape High Court on Monday, 16 November.