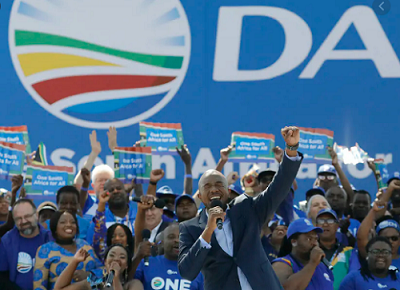 The Democratic Alliance came under fire on Tuesday morning for comparing the Nazis to the EFF.

Fighting broke out near Brackenfell High School on Monday between the “parents” of the EFF support group.

EFF members went to protest at the school after only white students and their parents took part in a private matrix ball.

The DA strongly supported the school’s parents, criticizing the police for dispersing the EFF protesters before the outbreak of tensions.

Whilst I appreciate the point made by @EFFSouthAfrica at #Brackenfellhighschool , I SBWL for leadership that will lead us towards creating our own dance, the African dance. We need to empower ourselves, build our own economy, our our own schools, produce our own food, cars, etc pic.twitter.com/BsGILPCjmo

Below is their full statement

The DA condemns in the strongest terms the ongoing threatening attempts by the EFF to bend society to its will by interfering where it has absolutely no business to be.

Following the burning and trashing of stores because of what the they consider offensive advertising, and seeking to tell Chief Executive Officers how to run their businesses, the EFF now thinks it has the right to control how citizens run private functions.

The latest outrage is the EFF protest, outside a school, over a private party held by some of the school’s matriculants – an event that had nothing to do with the school. To add to the absurdity, the EFF is demanding that the principal be fired.

The background to the matter is this: Brackenfell High School, like many other schools across South Africa, cancelled its matric dance due to Covid-19 restrictions.

As a result, matric learners countrywide organised private parties among their friendship circle as a substitute for a matric farewell. The Western Cape Education Department strongly encouraged such private functions to observe the Covid-19 regulatory environment.

One such party was organised by a group of 42 learners and their parents from Brackenfell High School out of a matric class of 254.

This party had absolutely nothing to do with the school. It was fully funded and organised by the parents and pupils involved.

Private events have absolutely nothing to do with any political party, and it was an outrage that the EFF believed they could arrive to protest outside the school and threaten parents and learners during the matric exam period (or at any other time).

It is also unfortunate that some community members responded in kind. Violent confrontations will do nothing to advance rational analysis, which is more needed in South Africa today than ever before.

If we are to prevent people taking the law into their own hands, the Police must do their job properly. It was the job of SAPS to prevent and disperse the EFF unlawfully gathering outside a school and seeking to infringe on the rights of private citizens.

The Nazi’s had the brown shirts that went around terrorising minorities. South Africa has the red shirts.